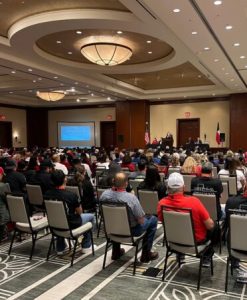 The conference is the first large-scale, in-person event the organization has held since 2019.

“Who are we?” she demanded, raising her arms and walking along the central aisle.

“SkillsUSA!” students and advisors shouted back.

Latham-Alford said she was excited for the students who have persevered through so much during the pandemic.

“We are here to recognize the students achieving at the highest level possible,” she said.

During the ceremony, Precision Machining Technology lead instructor Isaac Gonzalez, of TSTC’s Harlingen campus, was honored as the state advisor of the year. Gonzalez has participated in SkillsUSA for nearly 11 years.

“Thank you all for this award — it’s a good surprise,” he said after taking the stage. “For me, number one has always been you all. This competition has always been about you, but as instructors, we push you guys to the limits.”

Maria Botello, of Raymondville, is a Vocational Nursing student at the Harlingen campus who was competing Thursday afternoon in the Medical Math contest. She used practice tests and looked up mathematics problems online to prepare for the contest.

“We quizzed each other,” Botello said about her and her classmates participating in the contest. “I feel I know my stuff.”

William Johnson, a Precision Machining Technology student at the East Williamson County campus from Lexington, Texas, is set to compete Friday in the CNC Milling contest.

“I’m looking to see what skills I have and what everyone can do,” he said. “I want to see what it is like for machinists today.”

Edgar Zaragoza, a student at the Marshall campus, will be competing in the Welding Fabrication competition Friday. He practiced for the contest by doing projects in the campus’ welding lab.

“I’m pretty excited,” said Zaragoza, of Marshall. “It’s my first time experiencing this. I’m a little nervous, but I will see what I will do.”

One of Zaragoza’s classmates in Marshall’s Welding Technology program, Christopher Tucker, of Longview, is competing in the Welding contest Friday. Tucker said he was ready to unleash his competitive side.

“I’m ready to see what other types of welders we have out here,” he said.

Edgar Gonzalez, of Waco, is an Auto Collision and Management Technology – Refinishing Specialization student at the Waco campus. He is taking part Friday in the Auto Refinishing contest.

“I want to get my name out there,” Gonzalez said. “I want to put my skills to the test.”

Gonzalez prepared for the contest by doing class projects.

“I’m a little nervous (about the contest),” he said. “As I get into my workflow, I will do everything.”

The medals ceremony will be held Saturday morning at San Jacinto College’s Central Campus. Gold medalists will move on to the SkillsUSA National Leadership and Skills Conference being held in late June in Atlanta, Georgia.

For more information on SkillsUSA, go to skillsusa.org.

For more information on TSTC, go to tstc.edu.