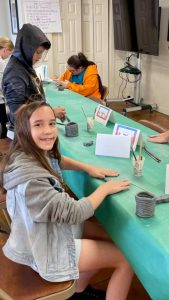 WCA would like to extend gratitude to Marilee Russell, the sponsor of the two Marilee’Z KidZ on Stage theater camps. The Musical Theater camp will be directed by Gale Gilbert. Along with Shelley Aubrey and Matthew Mahaffey, Gilbert also directed last year’s Musical Theater Camp where the children performed Don’t Count Your Chickens Until They Cry Wolf. Campers will learn every aspect of musical theater and at the end of the two-week camp, they will perform a musical for friends and family. On day one of the camp, they will audition for parts. They will learn their lines, music, choreography, build their own set, and make their own costumes. The two-week-long camp will end with two performances for families and friends at 5:30 pm on June 24 and 10:30 am on June 25 at 200 Market St. Winnsboro, Texas.

Chris Foster will direct the Beginner Drama Camp. Campers will learn the basics of theater production and put on a play based on the children’s book City Green by author DyAnne Disalvo-Ryan. They will learn their lines, music, choreography, and make their own costumes. This camp is a great primer for our musical theater camp. Campers will also learn about the importance of community gardens and Parks & Recreation in our own community of Winnsboro.

In the art camps, children will create art with a variety of different mediums including painting, clay ceramics, sculpture, drawing, fiber arts, printmaking, and more. There will also be two yoga storytime sessions so campers can get up and get their creative juices flowing. The week-long camps will end with an art show for families and friends so that campers can share what they have made during camp.

Instructor Brenda Roberts will teach the ceramics classes. These week-long classes are all about pottery and ceramics. Students will learn all types of techniques including pinch, coil, and slab building. Their ceramics will be fired in the kilns at WCA and then there will be a follow-up day for the students to glaze their ceramics

Registration is now open. Register for summer camps and classes at www.winnsborocenterforthearts.com/summer_camps.