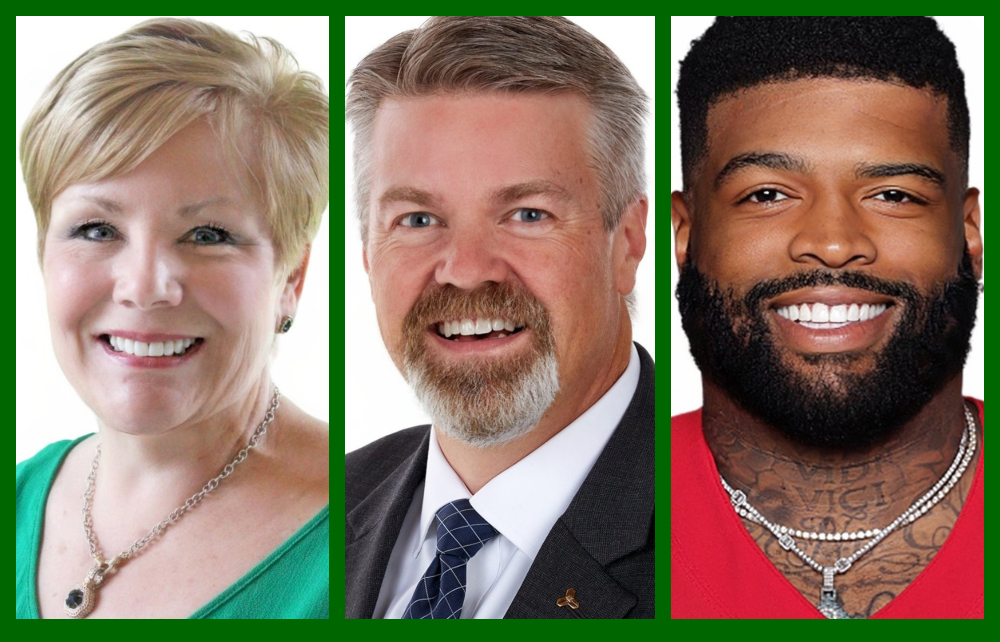 Longview Independent School District on May 6 will honor three accomplished former students during the annual Distinguished Alumni ceremony and luncheon.

Events are set to begin at 10 a.m. on May 6 with the Longview ISD Foundation commemorative brick presentation at the Lobo Foundation Plaza (near the home entrance to Lobo Stadium).

An 11:30 a.m. reception at Lobo Coliseum will be followed by lunch at Noon.

Distinguished alumni typically have excelled professionally, in addition to serving the communities in which they live. Honorees are nominated at-large and chosen by a committee of previous honorees, volunteer Distinguished Alumni Committee members, and the district’s Community Relations office.

A 1970 graduate of Longview High School, Kay continued her education at the University of Texas at Austin where she earned a Bachelor of Science. She then went on to obtain a Master of Science degree at Stephen F. Austin State University. Over the years, she has gone on to earn additional college hours and training that has allowed her to help so many graduating Lobos to pursue their college dreams.

Kay’s career started in 1974 as a 9th grade English teacher for LISD. For the next 29 years, she taught countless students during her dedicated service. In 1994 she went from teaching to being the Gifted and Talented Coordinator and District Testing Coordinator. She would do this until she retired from LISD. In 1995 Kay become the Executive Director of the Longview ISD Foundation, Inc. which she still performs today. In 2008, she become the College Advisor and Scholarship Coordinator at LHS which saw her launching the LHSD College and Career Center.

Since becoming the College Advisor and Scholarship Coordinator, Kay has conducted parent and student seminars called Lobo University, advised junior and senior students and their parents about the college admission process created informational handouts for students and parents mapping the road to college from grades 8-12, and so much more. Because of Kay’s diligent work, the Lobo community has had a brighter future.

The daughter of Leonard Helveston and Lois Helvenston, Kay was nominated by Emily Myers who described her as “the Lobos’ ‘Energizer Bunny’ with more energy and ideas on how to raise money to maximize the quality of education to students in LISD than any marketing analyst!”

“There is absolutely no one who has done more for the Longview Independent School District than Kay Ray!,” she said. “Not only has Kay spent her career making LISD great, but she also is a native of Longview who attended all twelve grades in the Longview Public Schools and is a 1970 graduate of LHS!”

He is active in many professional and industry associations. Since returning to Longview in 1994, Rogers has been extensively involved in the community while serving on various boards and committees.

Since 1983, Rogers has been at The Independent Bankers Bank where he became the chairman in 2021. He has also been at the Conference of State Bank Supervisors since 2020, the Southwestern Graduate School of Banking Foundation since 2010, the Independent Community Bankers of America since 2008, the Independent Bankers Association of Texas, and much more. Today he is Vice Chairman and Chief Executive Officer of Texas Bank and Trust.

Since graduating from LHS, Rogers has been recognized by the community for his great work. In 2007, the Longview Chamber of Commerce honored him as Citizen of the Year. Five years later, the East Texas Area Council Boy Scouts of America awarded him and his father the Distinguished Citizen Good Turn Award. He has received numerous other awards, all of which have made the Lobo Nation proud.

The son of Rogers Pope, Sr., and Joyce Pope, Rogers was nominated by Jennifer Harris who said she is “blessed to call him my friend.”

“A proud Lobo, Rog achieved many accomplishments while at Longview High School. Rog loves his family, and he loves this community.”

Born and raised a Longview Lobo, this Class of 2006 graduate was a unanimous first-team All-District, All-East Texas, and second-team All-State selection as a senior, leading the 2005 football team to a 10-0 undefeated regular season Class 12-5A District Championship. The multisport athlete also earned Track & Field honors as a shot putter. Considered only a three-star athlete by recruiting “experts,” Trent accepted a scholarship from the University of Oklahoma over offers from Texas A&M, LSU, and others.

Defying the expectations, Trent earned a starting position in his freshman season at OU and began a long and distinguished career for the Sooners, anchoring the offensive line at multiple positions. In 2008 the line gave up on 11 sacks all season, enabling Oklahoma quarterback Sam Bradford to win the Heisman Trophy. Trent was named All-American by The Sporting News magazine, the first of many collegiate awards he would receive during his career, including first-team All-Big XII twice, being a finalist for the 2009 Outland Trophy (best lineman), and being a unanimous All-American his senior year.

Entering the NFL Draft in 2010, Trent was widely considered one of the top prospects coming out of college, an expectation that proved true when he was selected in the first round by the Washington Redskins. Time and time again, Trent battled back from adversity to emerge as the best offensive lineman in professional football, being named to the NFL Pro Bowl nine times in addition to numerous other honors and accolades. Currently, he plays for the San Francisco 49ers where in 2020 he was statistically rated as the best lineman in the game.

But far more than his professional accomplishments, Trent has demonstrated a tremendous love and loyalty to his community and his alma mater. Exemplifying the credo of “Once A Lobo, Always A Lobo,” Trent has underwritten and sponsored numerous programs and initiatives to benefit of students and staff of Longview ISD, as well as his hometown. Various projects include buying the organ and piano at Parkview Baptist Church, to running numerous Silverback events in Longview. With the Silverback program, he has offered a free football camp almost yearly at LHS since 2013, giving away bikes, shoes to LISD students. Since starting the football camp, he has worked with hundreds of local students.

Trent has also provided funding for the Lobo football locker room and has worked with Christus Good Shepherd in Longview to provide heart screenings for 7th to 12 graders which he started in 2015. In 2017, his Lobo jersey number was retired. Most recently, he has decided to help dual-credit students at LHS by providing tuition assistance for their college classes. Aside from his amazing work for the Longview community, Trent also is a real estate investor, co-owner of O Athletik in Houston, and is an ambassador for Sarcoma Foundation.

Coach John King praised his former student-athlete, saying that “with Trent Williams, what you see is what you get.”

“For all the great things that Trent has done for the community that they know about, there are just as many things that he has done anonymously to help so many,” he said. “But that’s Trent. He doesn’t do it for the praise or the publicity, he does it out of love for the people of Longview and Lobo Nation.”

The son of Freddie Williams and Veronica Williams, Trent was nominated by his mother who described him as loving “his community and Longview ISD.”

“He is the prime example of ‘once a Lobo, always a Lobo.’ Being a Lobo is about bleeding green and showing love for your fellow Lobos and that is something Trent does every day.”

The VARA AS A UNIT OF MEASUREMENT IN EARLY TEXAS