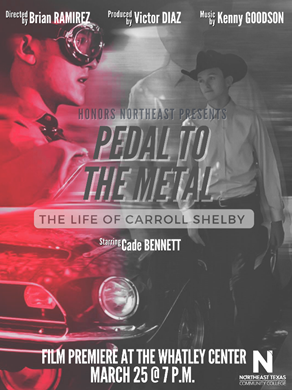 In this the tenth cinematic premiere of a story from the Texas past in as many years, Honors Northeast, and the NTCC Webb Society will present a film that deals with an intriguing symbol of late-twentieth-century American culture. The feature-length film will begin at 7PM on Friday, 25 March at the Whatley Center for the Performing Arts. The production is free, and the public is invited.  Free coffee, homemade cookies, and drinks will be provided afterward, in the Whatley Foyer.

The script is based on an original interpretation of the Shelby story pursued by the scholars of Honors Northeast, and the NTCC Webb Society, a collegiate auxiliary of the Texas State Historical Association. The testimony of several former friends of Carroll Shelby including NTCC’s Vice President for Development, Dr. Jonathan McCullough, and former NTCC Vice President for Instruction, Dr. Herb Riedel, as well as a minor library of books about Shelby, donated to NTCC through the efforts of Stephen Borkowski helped shape the final script.  The feature-length film was further enabled by the patrons of Honors Northeast, such as Jerald and Mary Lou Mowery of Mount Vernon, Texas composer, Kenny Goodson, who has composed a complete film score, and administrative help at NTCC.

A 2020 graduate of Paul Pewitt High School, and current Winkle Scholar at NTCC, Cade Bennett, stars as Carroll Shelby.  A District III Vice President for Phi Theta Kappa in Texas, a McGraw-Hill poster-award winner, and a presenter at the National Collegiate Honors Council, Bennett starred as Bo Pilgrim in last year’s film.  He also participated in the research on the Shelby film pursued last summer.   Victor Diaz, a freshman from Mount Pleasant, and also an NTCC Presidential Scholar, served as film’s the producer, editing about forty hours of film. Brian Ramirez, NTCC’s James and Elizabeth Whatley Scholar, the producer of last year’s film on Bo Pilgrim, served as the Director of this year’s film on Carroll Shelby.  Together, Ramirez, and Diaz pioneered a new element in NTCC filming—green-screening, which allows the film to simulate the protagonist racing at very high speeds.  Evan Sears, a first-year Presidential Scholar, served as the film scholar, developing a key idea about Shelby as a “doer-developer.”  Shelby was, like Mikhail Kalashnikov of the machine gun, and Glenn Curtiss of the navy plane, a participant and a developer of an evocative new technology—in this case, the Muscle Car.

Honors Director, Dr. Andrew Yox, notes: “this year’s film has special dramatic elements that we did not foresee, but have become increasingly exciting as we consider the whole creation. The Shelby story itself, of a lone Texan in a cowboy hat, at first racing, and then fighting with corporate giants such as Lee Iacocca over the fate of true speed, and power in America’s automobile industry, is packed with tension, and interest. In addition, Shelby had heart issues throughout his life that always reappeared at odd moments and threatened to end both his career and life.  As the emissary of the Muscle Car—an automobile that makes its appearance along with alpha males in James Bond’s Goldfinger, and Taylor Swift’s Blank Space, Shelby also modeled a “Muscle-Car mystique” in his relations with women, and there are many twists and turns in that narrative.  Finally, Kenny Goodson’s composed film score this year promises to fully synergize with the dramatic elements elsewhere.  The speed and power of his music, and his arrival, I believe, at a new plateau of musical sophistication is an event itself in our region’s history of music.”

Unlike the award-winning 2019 Ford v Ferrari film that dramatized Shelby’s friendship with racer, Ken Miles, and victory at Le Mans in 1966, the NTCC film portrays Shelby over the course of his adult life. This film depicts Shelby’s more personal struggles, to represent the epitome of the American muscle car ideal, relate to the women in his life, and find meaning in his final years when he was peripherialized by the big auto makers and faced major medical issues.

Past films in this series have included the stories of Bo Pilgrim, Adina De Zavala, Barbara Conrad, Mary Kay, Sam Houston, and the Texas Cherokee, Ma and Pa Ferguson, Harriet Potter Ames, Wright Patman, and Morris Sheppard.  All past films of the series can be viewed on www.ntcc.edu/honorsfilms.

The filming occurred over a five-day period in August and included sites at NTCC, the shop of NTCC’s Carroll Shelby Automotive Program, Good Shepherd Lutheran Church in Mount Pleasant, and several bed-and-breakfast establishments in Jefferson, Texas.

Questions about the premiere can be addressed to Dr. Andrew P. Yox at ayox@ntcc.edu.