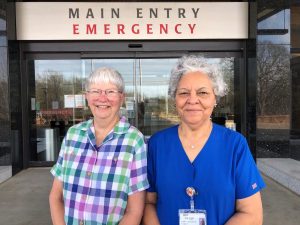 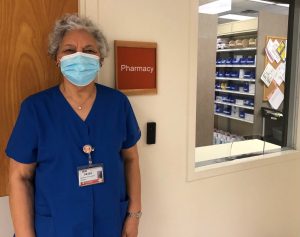 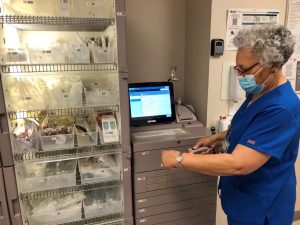 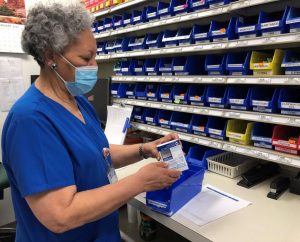 Photos show Patsy McCoy working in the pharmacy at UT Health Henderson and standing outside the hospital with longtime friend and coworker Bettye Scarborough.

Henderson, Texas (March 9, 2022) — Patsy McCoy lives by the words, “If you truly enjoy your work, you actually never work a day in your life.” McCoy, a certified pharmacy technician at UT Health Henderson, was honored Tuesday for 50 years of service at the hospital.

“If I didn’t like my job, I wouldn’t still be here,” McCoy said. “The atmosphere is good. If you like working with the people you’re with, your day is not hard.”

McCoy, 78, has seen a tremendous amount of change in her more than 50 years with the hospital — physical changes including demolitions and construction of new buildings, advances in technology, different ownership and societal changes, to name a few.

When McCoy started at the hospital as a licensed vocational nurse (LVN) in 1963, she was assigned to the area of the hospital where Black patients were treated before integration.

“When I started here, we had downstairs what you called a ‘colored ward,’ so that’s where we were,” she said. “Eventually as time went by, in the latter ‘60s and integration hit, we migrated up to this area slowly. So that was quite a shock there because me being a Black woman, we took a lot of harsh stuff, but you have to learn how to take the good with the bad. You have to be professional.”

After moving to the floors upstairs, “I got called a lot of names,” including racial slurs. “My parents taught me to take it in stride,” she said. “They taught me to be respectful.”

McCoy recalled her early years in nursing required a starched and ironed white uniform, stockings, polished white shoes and a white cap, “which was in the way.” Later, when pantsuits became fashionable and the director of nursing at the time refused to let her staff wear them, McCoy was part of a successful petition drive to allow pants instead of a skirt.

McCoy said she went into nursing because she knew she needed a job to help support her young, and growing, family. She and her husband John C. “Buster” McCoy, to whom she was married 57 years before he died in 2020, raised five children together in a home just down the street from the hospital.

Bettye Scarborough, RN, had recently started in the LVN program when she met McCoy in 1971.

“She was patient and she was a caretaker by nature. She was my mentor that way. I saw in her the kind of nurse and the kind of person I wanted to be,” Scarborough said. “I’m a task-oriented person, so she taught me a lot about being more people-oriented… to go the extra step with people, do the small things, don’t neglect looking people in the eye and trying to see their heart.”

Scarborough and McCoy developed a friendship outside of work, playing on the company softball team and helping each other pick up children at school, since three of their children were the same ages.

“We still talk every time I have to go to the pharmacy, I would hang in the pharmacy window and catch up on the kids,” Scarborough said.

McCoy was recruited to work in pharmacy in 1980 and has been there since. When she started, they were using typewriters, which was an upgrade from handwritten labels.

“I’ve seen so many changes. You don’t think about it at the time, you just come in and do your job… until they hit me with the computer,” she joked. “The computer has been my biggest challenge and my biggest change. We went to the computer and many times I have threatened to get my purse and go home!”

McCoy said what she loves most about her job is the people and the fact that she is still learning every day. “I am so blessed. I have worked with wonderful people.”

Her advice for those just entering their careers is simple, and advice she’s never had to take: “If you’re not going to be dedicated and do your job right, then move onto something else.”