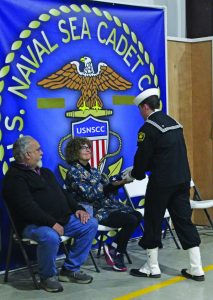 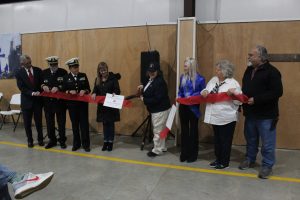 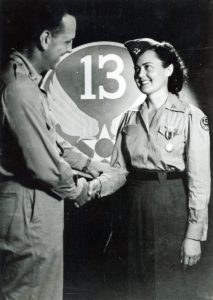 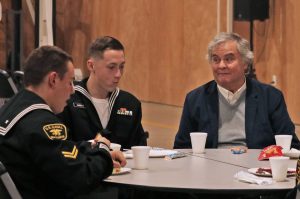 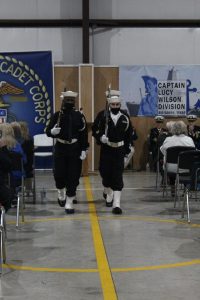 BIG SANDY, TX–Something special happened this past Saturday at the Big Sandy Civic Center and it is just the beginning of great things to come.  On Saturday, February 12, 2022, the U.S. Naval Sea Cadet unit that moved to Big Sandy, TX last month invited the community to an Open House event to include a Unit Dedication Ceremony.  The newly relocated Sea Cadet unit, opened its doors to the public to celebrate the life and contributions that Captain Lucy Wilson Jopling, a Big Sandy native, made to WWII and our nation by renaming the unit in her honor.  The Sea Cadets of the Captain Lucy Wilson Division of the United States Naval Sea Cadet Corps welcomed members of Lucy Wilson Jopling’s family who flew in from all over the United States to attend the event.  Three of her four children along with grandchildren, great-grandchildren, nieces, nephews and Captain Wilson Jopling’s sister, Gay Tucker, joined with an outpouring of community supporters to both honor Captain Lucy Wilson Jopling and welcome the Sea Cadets to the area.

In a written statement from the Wilson Jopling family issued to the Captain Lucy Wilson Division, they shared, “The Wilson Jopling family wishes to thank the Sea Cadets for honoring the memory of Lucy Wilson Jopling. We are thrilled to have others take note of the role that she played in the war as a woman soldier.  She was truly a warrior in white as she worked in the Pacific theater to save the lives of our soldiers.  She would be proud to be a namesake for your unit and your roles as sea cadets.”

The amazing and unexpected by-product of this event is that the legacy of this American hero brought together organizations from several neighboring communities to rally in support of these Sea Cadets.  Members of the Big Sandy Area Lions Club, the John Hogg Sr. Chapter of the DAR from Holly Lake Ranch, Big Sandy Chamber of Commerce, Big Sandy City Council, Big Sandy Ministerial Alliance, and Hawkins Area Chamber of Commerce showed up in force to help the Sea Cadets serve pancakes, set up and take down chairs, give tours of the Civic Center, cook hot dogs for the community, and to welcome the family of the unit’s namesake.  The Big Sandy Museum donated several copies of their documentary, The Lucy Wilson Story, to share with the family and to host the showing of the film at the event.  The City of Big Sandy provided keepsakes to send home with the guests of honor, the Wilson Jopling family, to commemorate their time in the city.  The Big Sandy Chamber of Commerce commemorated the event with a Grand Opening ribbon cutting ceremony and induction of the unit into the chamber.  “I am moved to tears by all of the support for our cadets.  In my nearly 13 years serving in the Sea Cadet program, I have never witnessed so much community support for our USNSCC program as was shown here today,” shared LT Joy Clark, Commanding Officer of the Captain Lucy Wilson Division of the USNSCC.  “Big things are happening in Big Sandy and this is just the beginning!”

Captain Lucy Wilson Jopling is one of the 101 Army nurses stationed in Bataan, Philippines prior to the onset of the US involvement in WWII. These nurses, often referred to as the Angels of Bataan, retreated with their patients to the tunnels of Corregidor Island when the Japanese invaded Bataan.  After 5 months of working under combat and near starvation conditions with their supply lines cut off, Captain Wilson Jopling was one of 13 nurses who were evacuated by the submarine, the USS Spearfish.  After returning to the United States, she did a recruiting and war bonds drive by traveling around the country to speak.  She wanted to continue to help the war effort in the Pacific, so she became a Flight Nurse and returned to the Pacific to evacuate the wounded from various islands throughout the Pacific theater saving countless lives.  She then went on to become the Chief Flight Nurse for the 801st Evacuation Squadron that evacuated POWs and the remaining nurses from the Philippines after the Japanese surrendered. According to her sister, Gay Tucker, a Big Sandy area resident, Lucy sent her military paychecks home to help her parents care for the younger siblings, during the war, as many families back home struggled during this time. Captain Lucy Wilson Jopling along with her husband, Dan Jopling, a survivor of Japanese POW camps, are heroes who sacrificed so very much to contribute selflessly to the war effort.  Captain Lucy Wilson Jopling is one of the most decorated women in Armed Forces history.  Her decorations include The Bronze Star, the Air Medal, a Presidential Unit Citation, the World War II Victory Medal, the Asiatic Pacific Campaign Medal, the American Defense Service Medal, the American Campaign Medal, the Philippine Defense Medal, the Philippine Liberation Medal, and the Philippine Independence Medal.  Lucy Wilson Jopling died on December 25, 2000 at the age of 83, but her legacy lives on through the Captain Lucy Wilson Division of the United States Naval Sea Cadet Corps.

The United States Naval Sea Cadet Corps is a national leadership development organization for youth ages 10-18 and is the official youth organization for the United States Navy and the United States Coast Guard.  The USNSCC provides youth the opportunity to experience a military lifestyle while learning a wide variety of valuable skills that they will carry with them through their lives, whether through military or community service.  Cadets attend drill in Big Sandy, TX one weekend a month and attend one or more USNSCC trainings offered throughout the United States and Puerto Rico during summer and winter breaks from school.  If a cadet chooses to go on to a career in the military after high school, they may have the unique opportunity to enter at a higher rank or attain priority placement for service academy or ROTC scholarships. The Captain Lucy Wilson Division invites all East Texas youth, ages 10-18, to visit and learn more about participation in the program.  Representatives of the unit are available to provide an introduction of the USNSCC to interested families each Wednesday between 5pm and 8pm at the Big Sandy Community Center, located at 207 E Gilmer Street, Big Sandy, TX.  For more information about the USNSCC and the Captain Lucy Wilson Division, contact the unit via email at EastTxSeaCadets@gmail.com or by phone at 903-471-0633.