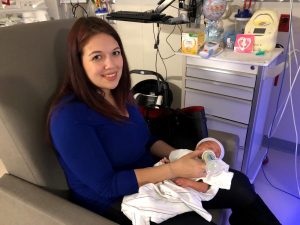 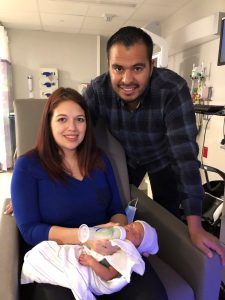 Tyler, Texas (February 16, 2022) — It could be said that Dario Gaona has known what he wants since birth.

Dario decided to surprise his parents, Leobardo Gaona Jr. and Fatima De La Hoya, by arriving six weeks before his scheduled due date. And now, at not even two weeks old, he definitely makes his desires known, especially at mealtime.

“He’s been very vocal, especially when it comes to his feedings. I love it,” said Sylvia Navarro, Neonatal Intensive Care Unit RN.

Dario became the first patient in the UT Health Tyler NICU when he arrived at 1:41 a.m. Feb. 4, several weeks before his March 16 due date.

“Everything happened so quickly,” Fatima said of the night she gave birth.

Only hours earlier, Fatima had been helping her son Sebastian, 5, with his homework when her water unexpectedly broke. Thankfully, Leobardo had arrived home from work minutes earlier. They scrambled to grab the hospital bag, which was only half packed at that point, drop Sebastian at his grandparents’ house and drive to the hospital.

Fatima had delivered Sebastian at UT Health Tyler and wanted to deliver her second child there because of her great experience five years earlier.

She said she’d read about the NICU’s recent opening but never imagined she would need it, or that Dario would be the first patient.

“I didn’t come here thinking he’d be in the NICU. I didn’t even think about that,” she said. Having her newborn receive care close to home rather than being transferred to another facility for a higher level of neonatal care meant the world to her. “That’s what was great is that we could come in here whenever we could and we were close to home.”

Fatima and Leobardo visit at least three times a day to feed and spend time with Dario, and say they feel like they can rest assured every time they have to leave him.

“As much as we want him home, we’re comfortable because we know he’s in good hands,” Fatima said. “We’re ready to get home but we’re going to miss the nurses.

“Aside from them being professional, they’re very personable,” she added. “It’s our home away from home right now.”

The NICU nurses who have been caring for Dario said it will be bittersweet when he soon graduates and heads home.

Brandy Rule, NICU RN, said it has been exciting to see UT Health growing in healthcare with the NICU opening.

“The community has needed this for a long time and I feel like this is really great for our moms and our babies and our staff here,” Rule said. 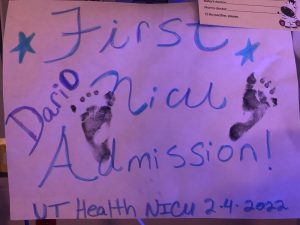 As a partner with The University of Texas System, UT Health East Texas is uniquely positioned to provide patients with access to leading-edge research and clinical therapies while training and educating the next generation of physicians and other health professionals. The nationally recognized UT System also includes UT MD Anderson Cancer Center in Houston, UT Southwestern Medical Center in Dallas, as well as three other major university medical centers located throughout the state.