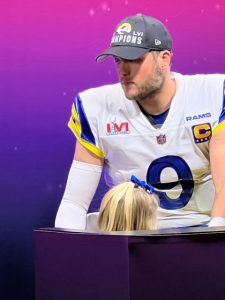 After 54 Super Bowls without a team playing in their home stadium with a chance to win the Lombardi Trophy the Los Angeles Rams became the second team in two years to play in their home stadium in the big game.  Interestingly, the Rams were designated as the visiting team and had to be on the opposite side of the field from where they normally are when they play in their stadium.  70,048 fans in attendance witnessed a barn-burner before the game ended. 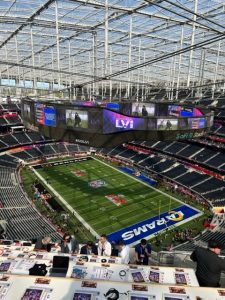 In an interesting twist, the Cincinnati Bengals allowed the Rams to keep their home team locker room for the game.  With the Rams being in the game they became the first team in NFL History to play in the Super Bowl in five consecutive decades.

According to reports Bengals fans bought 60% of the tickets sold for the game so the home stadium advantage was not expected to be as big of an advantage as one might expect.

The Bengals won the coin toss by tennis star Billie Jean King and elected to defer to the second half so the Rams got the ball first to begin the game.

Evan McPherson’s kick went through the end zone and Matthew Stafford brought the Rams out to begin the game on offense at their 25.  After picking up one first down the Bengal defense shut the door and forced a punt on a 4th and 20.  Trent Taylor returned a 39-yard punt by Johnny Hekker out to the Bengal 42 where Joe Burrow brought his offense out for the first time.

Burrow led his team just inside the midfield stripe at the Ram 49 but the ball turned over on downs to the Rams at that point after a 4th and 1 Burrow pass fell incomplete, giving Stafford and his unit the ball for the second time.

Things were quiet until Joe Burrow hit Ja’Marr Chase on a 46-yard gain to the Ram 11 with under two minutes left in the opening frame.  The Rams defense stiffened and forced a 4th and 10, setting up a 29-yard Evan McPherson field goal.  The kick was good with 28 seconds left in the first quarter and the Bengals closed the gap to 7-3 after moving 59 yards in 6 plays over 1:41.

The Rams got on the board again with 12:51 left in the first half when Stafford hit Cooper Kupp on an 11-yard TD pass.  The Rams went with a fake and a pass was intercepted and the 2-point conversion was no good, but LA led 13-3.  The drive was 6 plays, 75 yards and took 2:38 off the clock. 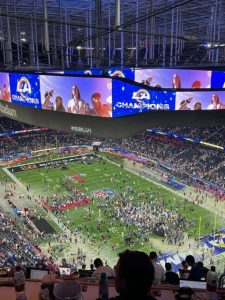 Burrow led the Bengals on their first TD drive of the day on their ensuing possession.  The score came when Joe Mixon tossed a 6-yard halfback option pass to Tee Higgins with 5:47 left in the first half.  The McPherson extra point was good and the Bengals pulled to within 3, 13-10.  The drive was 12 plays, 75 yards and took 7:04.

The Rams were moving the ball again when Stafford was intercepted in the end zone by Jessie Bates, III, giving the ball back to the Bengals at the 2-minute warning.  Cincy was called for unsportsmanlike conduct following the pick and Burrow and company began at their 10 following the turnover. 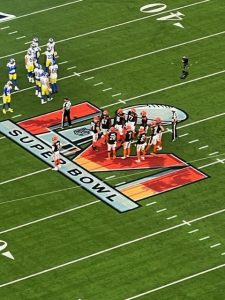 d on defense and following a punt Stafford got one last shot before the half with 30 seconds left in the quarter at his 41.  They had three incomplete passes and punted the ball away on 4th down.  The Bengals got the ball back at their 20 following a touchback with 4 seconds left in the half.  Burrow took a knee and the half came to a close with the Rams clinging to a slim 13-10 lead.

The Bengals got the second half kickoff and following a touchback at their 25 it took only 1 play for Burrow to get his team into the end zone for the second time.  He hit Higgins on a 75-yard TD pass on the first play from scrimmage.  McPherson added the extra point and with 14:44 left in the third quarter the Bengals took their first lead of the game, 17-13. The 1-play, 75-yard drive took just 12 seconds off the third quarter clock.

The Rams began at their 17 after the ensuing kickoff and on the first play of the possession Stafford’s pass was tipped and intercepted by former Dallas Cowboy Chidobe Awuzie and the Bengals were in great shape at the Ram 31.

Knowing they had to step up, the Rams defense came through when Aaron Donald sacked Joe Burrow on a key third down, forcing a 38-yard McPherson field goal.  The kick was good with 10:15 left in the third quarter and the Bengal lead advanced to 20-13.  The drive was 8 plays, 11 yards and took 4:23.

The Rams moved down to the 18 of the Bengals and outsmarted themselves on a key third down.  A handoff was tossed back to Kupp who threw a pass for running down the right sideline but Cupp’s pass was too high and Gay kicked a 41-yard field goal with 5:58 left in the third quarter, pulling the Rams back to within 4, trailing 20-16.  The drive was 10 plays, 52 yards and consumed 4:17.

The teams exchanged punts with neither able to get a sustained drive until late in the fourth quarter.  The Rams defense forced a key Burrow incompletion and following a 38-yard punt the Rams got the ball back with 6:13 left in the game and still trailing 20-16.

Rams fans knew this could well be their team’s last chance to pull out a victory and felt that Stafford and company would find a way to get into the end zone.

The Rams faced a 4th-and-1 and Kupp picked up the first down with 6 yards to spare, keeping hope alive for the Rams fans in attendance.  Stafford methodically moved his team down the field and at the two minute warning with 1:55 left in the game the Rams were set up with a 1st and goal at the 8-yard line of the Bengals. 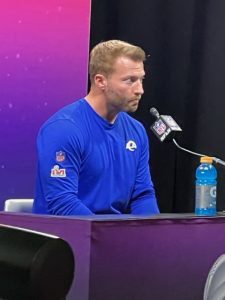 Rams fans wanted their team to score but didn’t want to leave Joe Burrow much time on the clock to move the Bengals down the field to tie the game or send it into overtime.  The Rams got another first down at the 4 following a defensive holding.

Stafford went on a quarterback sneak and got about half the yard to the goal line.  On the next play Stafford hit Kupp with 1:25 left in the game for the touchdown.  McPherson added the extra point and the Rams led 23-20.  The drive was 15 plays, 79 yards and took 4:48 off the clock.

Bengals fans weren’t ready to concede because they knew that Burrow and his talented receivers still had a chance and Rams fans were on the edge of their seats praying their defense could hold on for the last-minute victory.

Following a touchback the Bengals took over on their 25.  Burrow hit Ja’Marr Chase for 17 on the first play of the possession.  He hit Tyler Boyd for a gain of 9 on the next play before throwing incomplete on the next play at the Rams 48.

Stafford took a knee and the game ended giving the Rams a 23-20 victory in Super Bowl LVI.

When Rams Coach Sean McVay addressed the media after the big win he was asked about the resilience of the team, and he responded, “I can’t say enough about the resilience of this team.  Buys stepping up when they had to and it’s going to sound like a broken record, but that’s what makes this team great.  That’s why they’re world champs.  Our best players stepped up in the most crucial and critical moments.  You end up losing some guys and guys were asked to step up.  I just can’t say enough about how much I love this group.  They play for one another.  There’s something really powerful about being a part of something bigger than yourself and you can see that in the way these guys competed.  Love these players.  Love these coaches.  They are world champs and I’m glad I don’t have to listen to Gary give me shit anymore.” 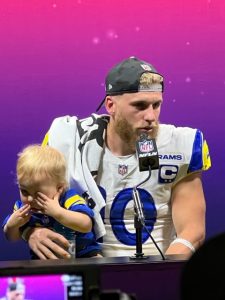 Quarterback Matthew Stafford, as expected, was ecstatic when he faced the media following the win.

“It feels great.  Just so happy to be able to celebrate this with such great teammates and my family; people who mean the most to me and so proud of this group, and it’s a special feeling.”

Game MVP Cooper Kupp was asked about his winning score route and said, “We had a little run alert in and we call the run if we get the look we want to—we ended up getting a zero on that one.  Alert and throw a little fade ball up there.  Eli Apple had been playing me pretty well the entire game.  He really came up and challenged me.  He did a really good job with that.  Coverage zero, you got that inside leverage so I tried to weave to his leverage and make him move in a little bit and make him jab one time and be able to give Matthew some room to put the ball where he wanted to and he made a great back shoulder throw and I was able to come down with it.”

Aaron Donald literally sealed the win for the Rams with his pressure on Burrow on the final offensive play for the Bengals.  He was asked what was going through his mind before the final Rams’ defensive play.

“We had made a third-down stop.  Fourth down, I thought they would run, but they dropped back to pass.  Found a way to get the chop-club and bend the edge and found a way to get to the quarterback and make him throw an errant pass.  I actually tried to get the ball out, but he threw it up so I was a little nervous at first.  It was a huge play.  It was a great few stops for the defense that we made leading up to that.  I think we started talking over the game up front when we needed to.  We’re world champs!”

Of course, things were not as pleasant when the Bengals faced the media.  Coach Zac Taylor was asked about his feelings when he held his presser after the loss.

“It’s tough.  To fight and get this far and not finish it off.  Really proud of the way our team played.  They gave us tremendous effort and put us in a position to win.  We just needed one more stop, one more score there at the end to be champions.  Hats off to the Rams, they got it done.”

Quarterback Joe Burrow, who has begun trying to out-dress Cam Newton in suits he wears to games of late, was predictably upset.

“It hurts.  We put a lot of work into going out there and executing and performing well and it didn’t turn out the way we wanted.  So, it’s disappointing.  We’re a young team.  You like to think that we’ll be back in this situation multiple times over the course of the next few years.  We’ll take this and let it fuel you for the rest of our careers.”

All in all, it was a very exciting game that went down to the wire.  Congratulations to Matthew Stafford and the Los Angeles Rams for becoming the second team in history to win the Lombardi Trophy in their home stadium.  One would doubt that happens three years in a row, as Kyler Murray has pretty much indicated he wants out of Arizona and Kliff Kingsbury’s college offense just can’t seem to win big games.

Sadly, the 2021 NFL season has come to a dramatic close.  We’ll all take about 6 months away from football and look forward to NFL training camps at the end of July when preparations for the 2022 season begins.  To all the teams in the League, thanks for the memories in 2021!