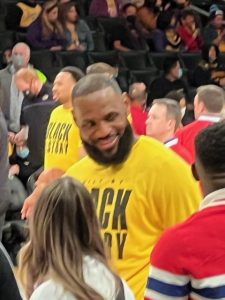 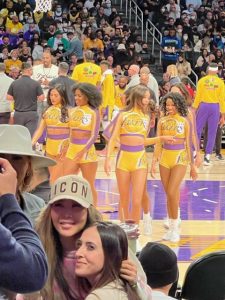 The reigning NBA Champion Milwaukee Bucks took on the Los Angeles Lakers at Crypto.com Arena in Los Angeles Tuesday night.  The Mirror was given First Class treatment.  We were in the VIP section just 5 rows from the floor at the corner of the court and were given access to the Chairman’s Room, a food and drink venue for the VIP attendees.  We were served roasted lamb, mashed potatoes, pulled pork sliders, sushi, vegetables with dip, fruit, numerous deserts and popcorn.  We were given access from an hour before the game tipped off and throughout the game.

As one might expect, the Bucks had little trouble on the road with the sub-500 Lakers.  They led 38-24 after the first quarter.  They extended their lead to 78-56 at halftime.  At the end of the third quarter they increased the lead to 109-85 and held on for an easy 131-116 victory over the Lakers.

One of the few bright spots for the Lakers was the play of LeBron James.  He scored a season-high 34 points in the game, but the offenselooked anemic most of the game and the defense was horrific.  The Lakers had no capability to stop Giannis Antetokounmpo who led the Bucks with an 11/17 field goal effort that resulted in 25 points.

LA travels to Portland tomorrow Wednesday night to take on the Trailblazers who are 21-34 on the season and in 11th place in the Western Conference.  The line has the Lakers favored by 7.5, but with the mediocre play they are currently getting a win is anything but guaranteed.

Laker fans became very impatient when their team went down by 30 points in the third quarter and actually began booing their team.  The put together a run and cut the lead to 10 before Milwaukee took control of the game again and closed out with the big win.

Based on what they put on the court Tuesday night, the rest of the season will most likely frustrate their fans even more.  Laker fans don’t tolerate losing well at all!