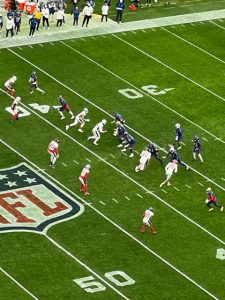 For the second time in three days Allegiant Stadium, home of the NFL Las Vegas Raiders, hosted a bowl game.  Thursday night the venue hosted the 98th East-West Shrine Bowl featuring college seniors hoping to make it to the NFL next season and on Sunday the stadium hosted the NFL Pro Bowl game.

The game featured the best athletes from both conferences, but as everyone knows, there is not the same emphasis for winning the game that there would be in a regular season or playoff game.  The players enjoy the camaraderie of visiting with players from the teams they compete against during the season and it is more of a fun time with a little football mixed in as opposed to a do-or-die game.

The NFC won the toss and elected to get the ball first.  In an effort to avoid potential injury in a game that has not real meaning, there were no kickoffs in the game.  The NFC began at their 15 with Kyler Murray of the Arizona Cardinals at quarterback.

Murry was intercepted by Darius Leonard for a pick-6 with 12 minutes left in the first quarter.  Justin Tucker added the PAT and the AFC jumped out to a quick 7-0 lead.

Under crazy Pro Bowl rules after scoring the TD the AFC elected to go for a 4th and 15 from their own 25.  They gained 14 yards on a pass and the NFC took over at the AFC 39.  Kirk Cousins came in at qb for the NFC and he led his team to a TD when he hit Kyle Juszozyk on a 14-yard TD with 9:57 left in the opening quarter.  The PAT kick by Jake Elliott was good and the game was tied at 7-7.

The NFC opted for the 4th and 15 try from their 25 following the score.  Cousins remained at quarterback and he threw an interception to Antoine Winfield, Jr. who returned it and then tossed a pass to the left that was returned to the NFC 15.  On the first play Justin Herbert hit Mark Andrews for the 15-yard TD pass with 9:26 left in the first quarter.  Justin Herbert added the extra point and the AFC regained the lead, 14-7.

The NFC got the ball at the AFC 25 with a first down and Russell Wilson came in at quarterback for the NFC.  He led his unit down to the 6-yard line, but a 4th down pass was intercepted by JC Jackson and the AFC took over on their 3.

Patrick Mahomes came in a quarterback and he threw a 57-yard pick-6 to Antoine Winfield, Jr. on the last play of the first quarter bring the score to 14-13 in favor of the AFC.  The NFC went for a 2-point conversion but a Cousins pass fell incomplete.

After the score the NFC faced a 4th and 15 from their 25.  Kirk Cousins had a pass tipped and intercepted by Myles Garrett on the play and he returned the ball for a pick-6, putting the AFC up 20-14.  Mac Jones came in and threw a 2-point conversion pass putting the AFC up 22-14.

Murray hit Mike Evans on an 18-yard TD pass with 10:41 left in the first half.  The NFC went for 2 and Murray hit CeeDee Lamb for the conversion, bringing the score to 22-21 in favor of the AFC.

Following the conversion the NFC got the ball back facing a 4th and 15 at their 25.  Russell Wilson came in and threw an incompletion turning the ball back over to the AFC at the NFC 25. Mac Jones remained in at quarterback.  On a 4th and goal a Jones pass fell incomplete and the NFC took over on downs at their 9.

Russell Wilson came back in and on the first play of the possession he threw an interception to Derwin James and the AFC had the ball back at midfield.  Herbert returned at quarterback and he hit Mark Andrews for a gain down to the NFC 10.  On the next play Herbert hit Andrews for a 7-yard TD pass with 5:01 left in the first half.  The AFC chose to go for 2 once again.  Najee Harris was stopped short of the goal line, making the score 28-21 in favor of the NFC.

The AFC chose the 4th and 15 option once again.  The pass was incomplete and the NFC took over on the AFC 25 with 4:18 left in the half.  The AFC took back over on downs when a Cousins pass from the AFC 12 fell incomplete.

Mahomes came out to lead the drive.  After running 3 plays the clock expired on the first half of play with the AFC leading 28-21.

The second half began with the AFC getting the ball at their 5 and Mac Jones at quarterback.  He led the AFC methodically down the field and the drive ended with and 8-yard pass to Devin Duvernay with 7:24 left in the 3rd quarter, advancing the AFC lead to 34-21.  The 2-point conversion pass attempt fell incomplete.

Following the score the NFC set up shop on their 25 with a 1st and 10 and Russell Wilson was in at quarterback.  The AFC defense forced a turnover on downs and they took over at the NFC 28 with Jones still at quarterback.  Stefon Diggs ended the possession on an end around toss 4-yard TD run with 1:39 left in the third quarter, pushing the AFC lead to 40-21.  Justin Tucker added the point after touchdown and the AFC lead mushroomed to 41-21.

The NFC got the ball at their 25 for their next possession with Murray at the helm.  It was a short possession as the ball turned over on downs at the NFC 46.

After a short possession the NFC got the ball back and Murry hit Kyle Pitts for a TD with 10:18 left in the game.  Jake Elliott added the extra point and the AFC lead was cut to 41-28.  The NFC chose to try the 4th and 15 play from the 25 after the score.  Russell Wilson hit Dalvin Cook for 10 yards but the AFC took over after the failed attempt.

Mac Jones led the AFC on the possession but the NFC held and Russell Wilson came back in to lead the possession.  He drove the team down to the AFC 34 and was sacked on a 4th down play and the AFC got the ball back at that point with 5:18 left in the game.

Justin Herbert was intercepted by Marshon Lattimore and the NFC got the ball back at the AFC36 with 3:47 left in the game.  Kyler Murray quarterbacked on the possession.  Murray led the NFC to a TD when he hit Cook from 5 yards out with 2:36 left in the game, making the score 41-34 in favor of the AFC.  Jake Elliott added the PAT and the NFC trailed by 6, 41-35.

The AFC took over on their 25 following the score and hoped to run the clock out.  They managed to convert a 4th and 2 and with the NFC out of time outs the victory was secured for the AFC.  Jones took a knee two times and the game ended with the AFC claiming the victory 41-35.