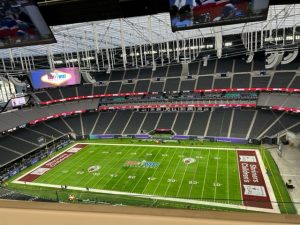 PARADISE, Nevada –  The annual Shriners Children’s East-West College Bowl Game featured 110 athletes, many of whom will be playing in the NFL next season.  The game showcased talent from universities all across the US in front of many NFL scouts and coaches…  The East roster consisted of 57 players and the West roster featured 53 players.

The West team received the opening kickoff to begin the game.  Isaih Pacheco of Arizona returned the kick to his 25 and the West set up at that point.  Jack Coan of Notre Dame began at quarterback and led his team down the field.  The moved methodically down the field and faced a 4th and goal at the 1 and went for the touchdown.  Ty Chandler of North Carolina was stopped just inside the 1 and the East took over on downs.  The drive consumed 5:50 off the first quarter clock.

Dustin Crum of Kent State began at quarterback for the East on their first drive.  The West defense only allowed 8 yards in 3 plays and the East went three-and-out.  Tommy Heatherly of Florida International punted the ball away and the West went back on offense for the second time at their 44.

Coan led his unit the 56 yards into the end zone for the first score of the game.  The TD came on a 2-yard pass from Coan to Teagan Quitoriano of Oregon State with 49 seconds left in the first quarter.  A try for a 2-point conversion was good when Jashaun Corbin of Florida State successfully got into the end zone, putting the West up 8-0.  The drive was 10 plays and 56 yards and took 6:35 off the clock.

Following the ensuing kickoff the East set up for their second possession at their 19.  They ran one play and the first quarter came to a close with the East having run only 4 plays in the quarter.

The second possession went much better for the East until a bad exchange turned the ball over to the West at the East 46.  Brock Purdy from Iowa State came in at quarterback on the possession.  The drive stalled at the East 30 and Caleb Shudak came in to attempt a 48-yard field goal.  The kick was no good and the East took over at their 38 with 7:07 left in the first half of play for their third possession of the game.

The West defense forced another punt and they went back on offense at their 18 with 5:11 left in the first half.  They managed to get into field goal range once again and this time Shudak connected on a 50-yard field goal with 1:07 left in the half, pushing the score to 11-0 in favor of the West.  The drive was 8 plays and 42 yards and consumed 4:04 off the clock.

There was no further scoring in the first half and the East got the ball to begin the second half of play.  They began at their 25 after a touchback on the kickoff.  Once again the West played like gangbusters on defense and forced a three-and-out.  Following a punt the West went back on the offensive at their 24.

Skylar Thompson of Kansas State came in at quarterback on the possession.  He led his unit down the field without much challenge from the East defense.  The drive ended when Thompson hit Virginia tight end Jelani Woods for an 8-yard TD with 7:09 left in the third quarter.  Once again the West went for 2 and Thompson connected with Tyquan Thornton of Baylor, increasing the West lead to 19-0.  The drive was 9 plays, 76 yards and took 5:30.

The East finally got on the board on their next possession, driving 75 yards in just 3 plays and 58 seconds after a touchback.  The score came on a 55-yard TD pass from EJ Perry of Brown University to Pierre Strong of South Dakota State with 6:11 left in the quarter.  Perry ran in the end zone for the 2-point conversion and the West lead was cut to 19-8.  The drive was a mere 58 seconds long.

The West began their next drive at their 25 following a touchback and moved down to the East 49 as the third quarter came to an end.  They continued the drive in the final quarter but were forced to punt the ball back to the East after an incomplete deep pass on third down.  The Ryan Stonehouse kick hit East player Clint Ratkovich of Northern Illinois and the West recovered the ball at the East 15 and had new life and a new set of downs.

Thompson remained in at quarterback on the drive and he led the offense into the end zone for another TD score.  Corbin ran in from the 5 with 12:10 left in the game.  Once again the West went for a 2-point conversion.  A Thompson pass fell incomplete, but the West increased the lead to 25-8.  The 15-yard drive took 1:50 and just 4 plays.

The East took over at their 25 after a 28-yard return by Josh Johnson of Tulsa.  They managed only 6 yards on the possession before having to punt the ball away once again.  The West wasn’t able to get any traction on their next possession either and the East got the ball back on another West punt.

EJ Perry led the East offense on an 88-yard drive over 10 plays that took 4:42 off the clock and the drive concluded with a 6-yard TD pass from Perry to Samori Toure from Nebraska with 3:53 left in the contest.  The 2-point conversion was good on a run by Perry and the East closed the deficit to 25-16.

They went on a 5-play, 86-yard drive that took just 1:12 and ended when Perry hit Ronnie Rivers of Fresno State on a 17-yard TD pass with 1:37 left in the game.  Rivers ran into the end zone for a 2-point conversion and the East closed the deficit to 25-24.

An onside kick was recovered by the West at their 46.  Purdy took a knee out of victory formation for three plays and the game ended with the West gaining the ever so slim 25-24 victory.