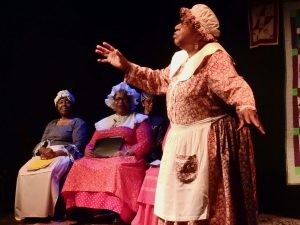 The Pleasant Hill Quilters perform on the Bowery Stage at Winnsboro Center for the Arts.

Winnsboro, TX – Winnsboro Center for the Arts (WCA) and Helping Young People Excel (HYPE) partnered together to present The Pleasant Hill Quilters in a special performance at 11 am January 22, 2022, at 200 Market St. Winnsboro, Texas. The Pleasant Hill Quilters are a quilting group from Linden, Texas. The group consists of LaWanda Warren, Ethel Blaylock, Oteria McDaniel, and Flo Stevenson. The quilting group was formed in 2004 and has been performing shows together for nearly 18 years. They sing and share the oral history of the secret codes used in quilts that helped enslaved people in the Underground Railroad. The show at WCA was well-attended and the intimate space was filled with the sounds of meaningful spiritual hymns, stories of enslaved people, and historical information of the secret quilt codes.

The group was formed after Stevenson found one of these quilts at a flea market in Montgomery, Alabama, and remembered a book that she had recently read, Hidden in Plain View: A Secret Story of Quilts and the Underground Railroad. Stevenson and a group of community members in Linden decided to form the quilting group and start sewing their own quilts based on the secret code patterns.

The Pleasant Hill Quilters wear brightly colored hand-sewn bonnets and aprons during their performances, sing spiritual hymns, and educate attendees about the secret codes of the quilts. Literacy was forbidden for enslaved people in the United States. Because many were unable to read, important messages were conveyed through stories, songs, and symbols. Quilt codes were stitched into quilts and displayed where enslaved people escaping to the north could see such as windows, clotheslines, or porches. The codes held important messages that helped people navigate their way to freedom.