Young people these days are lazy. Nobody wants to work anymore. Students just want college given to them. In a time where stereotypes like these have become widely accepted, Northeast Texas Community College (NTCC) is finding the opposite to be true with its innovative Work4College Program.

About 10 years ago, administrators at the small rural college started looking for solutions to rising student loan debt.  Like many institutions nationwide, they were seeing higher loan amounts and an increase in default rates.

“We had students leaving our public two-year college with upwards of $30,000 in student loan debt. That is a huge amount of money to owe when you are just starting out in your career,” Dr. Jonathan McCullough, NTCC Executive Vice President for Advancement, said. “We had a theory that, if given the opportunity, many students would prefer to work to pay for college instead of taking out loans.”

That theory led to the development of the Work4College Program, which launched its pilot cohort of 15 students in the summer of 2014. Funded solely by private donations, the program put those students to work on the college farm. They were paid $15 per hour for their time. Half of that amount went into their pocket in form of a paycheck and the other half went into a scholarship fund to be used to pay for future classes at NTCC.

“While there are some private institutions that use work study models, there really weren’t any public colleges that had taken this approach in the past. We started out small and really didn’t know what to expect that first year,” McCullough said. 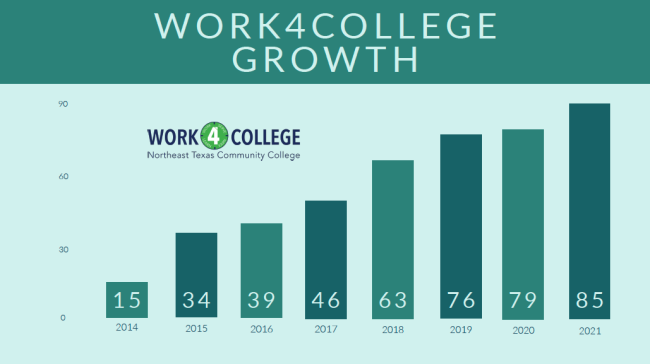 Word quickly got out about the Work4College Program and the number of applications grew rapidly after that first year. While the college continued to add positions, demand still outpaced the positions available.

“It really was phenomenal to see how many people were lining up to work for their education. We aren’t talking about easy jobs – many of these students spend their days in the Texas summer heat doing manual labor,” McCullough said. “What was even more interesting was the fact that the majority of the students taking advantage of the program were still in high school.”

The program more than doubled in the second year, with 34 positions filled in 2015. Since then, Work4College has seen marked growth annually with 85 students in 2021 (see graphic). The program has now expanded beyond just on-campus positions, and several local high schools have partnered with NTCC to host workers during the summer.

Work4College is open to anyone who has completed at least their sophomore year of high school. Students can use their earned scholarship money to pay for any future classes at NTCC, including dual credit classes. Work4College allows students to participate for up to two years, which more than 50% choose to do.

“Even though I planned to attend a university after high school, the Work4College Program at NTCC just made sense to me, stated Saul Martinez, who participated in Work4College for two years, said. “I liked being able to help take the burden of paying for my dual credit classes off of my parents and it was also nice to make some spending money.”

High school students weren’t the only ones interested in working for their education.

“Our oldest Work4College student was well into his 60s. It’s always interesting to see the dynamic that form between the older and younger participants,” McCullough said. “As the current workforce consists of so many generations, it is an excellent introduction into the ‘real world’.”

When students are accepted to Work4College, they sign on for more than just a job. In addition to their assigned work duties, they also take a credit college class that teaches them important life skills. The motto of the program is Work. Serve. Learn. Earn.

“We really focus on cultivating our Work4College students as individuals. In the class we focus on topics like money management, resume writing, community service and even etiquette,” Mason May, Director of the Work4College Program, said. “We want them to leave us more confident in themselves and their abilities.”

The Work4College Program has become popular with more than just the participants. They have become a vital part of the college’s workforce during the summer and do important work that would otherwise be neglected or have to be outsourced. NTCC employees across campus serve as supervisors to Work4College students.

“Taking care of a working farm during the summer is a huge undertaking. Our Work4College farm crew has been invaluable as they help with tasks from mowing to assisting with canning in the kitchen,” René McCracken, NTCC Director of Agriculture, said.

Donor support has also continued to increase over the years. The program has raised $3.1 million with $2.6 million going directly into an endowment.

“Work4College is an easy sell for donors. When they see kids willing to work for their education they are more than happy to give generously,” McCullough said. “In addition to significant gifts from individuals, we have also received support from several large foundations who want to support our mission and hope to see our model replicated at other colleges.”

The application for the 2022 program opened in December and the next months will be spent preparing for the largest Work4College class to date. The plan is to have close to 100 positions available.

“It is hard to believe how far we have come from that first class of 15 students. We had no idea just how popular the Work4College concept would become,” McCullough said. “While it might not be the case everywhere, we can say with certainty that there are plenty of young people in Northeast Texas who are not only willing to work to avoid student debt, they are willing to sweat to make it happen.”