Former Gilmer Buckeye and current UTSA Coach Jeff Traylor led his team to its second bowl game in his two seasons as head coach of the Roadrunners Tuesday night, December 21st as they took on the San Diego State Aztecs in the Tropical Smoothie Café Frisco Bowl at Toyota Stadium in Frisco in a game that telecast on ESPN before 15,801 fans.  This second bowl game appearance was even more special that the fi 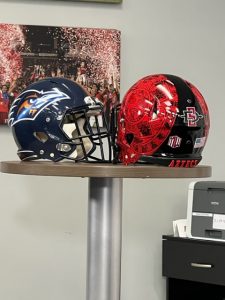 rst one in 2020 for Jeff since he missed the bowl game due to having COVID last year.

UTSA came into the game at 12-1 on the season and champions of CUSA.  They won CUSA after a high scoring 49-41 game over Western Kentucky.  San Diego State came in at 11-2 on the year and champions of the Midwest Conference West.  They lost the Mountain West Championship game 46-13. 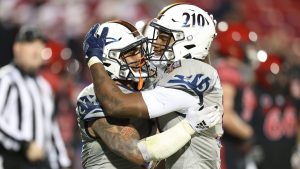 UTSA had a bit of a handicap since All-American running back Sincere McCormick decided not to play in the game, and understandably so.  He announced a week earlier that he was going to opt out of his senior season and declare for the 2022 NFL Draft next April in Las Vegas.  Probably as a result of that the Roadrunners entered the game as a 2.5 point underdog in the Bowl game.

San Diego State won the coin toss and elected to defer to begin the game.  Matt Arazia kicked the ball out of the end zone and UTSA began at their 25 with quarterback Frank Harris at the offensive control.

Harris led the ‘Runners quickly down the field with Brenden Brady in the backfield replacing McCormick.  UTSA scored on a 12-yard TD pass from Harris to De’Corian Clark with 12:36 left in the first quarter.  The drive took 2:24 seconds and covered 75 yards in 7 plays.  Hunter Duplessis added the PAT and the Roadrunners had an early 7-0 lead.

Jordan Byrd returned the ensuing Duplessis kickoff to his 32 where the Aztecs got the ball for the first time.

Lucas Johnson brought his offense on the field to lead their possession.  The UTSA defense forced a three-and-out and following a SD State punt and return

the Roadrunners took over on their 34 for their second possession of the game. 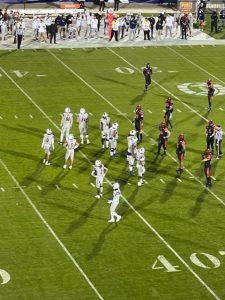 Harris moved his team down to the Aztec 37.  Jeff Traylor opted to go for the first down on a 4th and 7 but the pass fell incomplete and SD State took over on their 37.

Aided by a personal foul call against the UTSA defense the Aztecs got into the end zone on a 20-yard pass to Jesse Matthews with 5:09 left in the first quarter Araiza added the extra point and the game was tied at 7.  The drive was 6 plays, 64 yards and took 2:03. 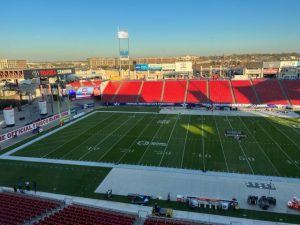 Following a touchback on the kickoff Harris led UTSA back to the field on offense to begin their third drive of the game.

After defensive pass interference against the Aztecs in the end zone UTSA had a 1st and goal on the 2.  On the next play Bailey ran into the end zone for a 2-yard TD with 2:02 left in the opening frame.  Duplessis added the extra po.int and UTSAled 14-7.  The drive was 75 yards and it took 8 plays andtook 3:07 off the clock.

There was no further scoring until Johnson hit Jesse Matthews from 11 yards out with 9:14 left in the first half.  The Araiza extra point was good and the game was tied at 14.  The drive was 9 plays, 54 yards and took 4:18.

There was one more score in the first half when SD State moved 74 yards in 10 plays and took the final 1:55 off the clock.  The Aztecs kicked a 34-yard field goal on the last play of the half to take a 17-14 lead at the break.

The Aztecs received the second half kickoff and following a big return to the UTSA 48 they drove into the end zone when Greg Bell scored from 1-yard out with 11:59 left in the third quarter.  Araiza added the point after and SD State widened their lead to 24-14.  The drive was 6 plays, 48 yards and took 3:01.

The Roadrunners moved down to the Aztec 19 before Duplessis came in to try a 41-yard field goal.  The kick was good, pulling UTSA to within 24-17 with 10:09 left in 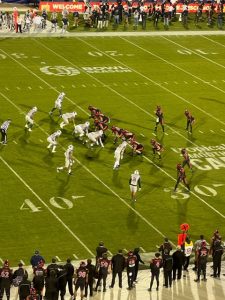 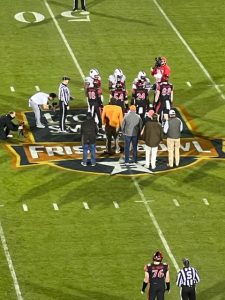 Johnson hit Tyrell Shavers on a 24-yard TD strike with 2:39 left in the third quarter and following the Araiza extra point kick the Aztec advantage swelled to 31-17 and UTSA was in deep trouble and needed to make something happen on their ensuing possession.  The drive was   6 plays, 69 yards and took 2:58.

UTSA responded when they had to as Harris hit Zakhari Franklin from 3 yards out on the final play of the third quarter.  The drive was 8 plays, 75 yards and took 2:35.  Duplessis added the extra point and UTSA pulled to within 31-24 with a quarter left to play.

San Diego State was not amused as they moved right down the field in response to the UTSA score and Johnson scored on a 2-yard run with 9:51 left in the game.  Araiza added the extra point and UTSA trailed 38-24.  The drive was 10 plays, 65 yards and took 5:09.

UTSA never threatened to score again and the Aztecs won the game 38-24.  The win moved SD State to 12-2 on the year while the loss dropped the Roadrunners to and identical 12-2 record.

UTSA Coach Jeff Traylor was disappointed in the outcome of the game but indicated he was proud of his team and their accomplishments in the 2021 season.

“Obviously we were frustrated.  That was a really good football team tonight.  They played really well.  We’re disappointed; frustrated and disappointed.  That’s the best way to describe it and that’s how we feel right now.”

“Our kids competed all the way to the end.  It’s frustrating when you play really good people.  They make you look bad at times.  I’m disappointed in myself on the 4th down and 1 call.  Third down we weren’t very good and that’s on me.”

“Well, those guys are the reason I’m in this chair.  I’m sorry we didn’t play better tonight.  It would have been a lot better if we’d have put it on and played better.  They might be ready to kick me out of the club right now.  That’s all that was.  They had sent it to me and they asked if I would do that and I was honored that one they’d send it to me and two they’d ask me to.  I’m just disappointed we didn’t perform better.  It was not lack of effort.  My kids were fantastic.  My job is I’ve got to coach them better; end of story.”

One circumstance that went overlooked to a lot of people was that UTSA was missing a number of players in addition to McCormick for the game.  Jeff was asked how many of his players were not suited out for the game.

(We had) up to 25; anywhere from grades to COVID to flu, to NFL, to injuries.  It is what it is and our guys who were out on the field are the ones that need to be talked about.  They were fantastic and they gave me everything they had.  It was unfortunate, but we had enough tonight and we just didn’t get it done and that’s on me.”

While the Roadrunners lose a number of seniors to graduation in the spring, they return a number of starters including quarterback Frank Harris and the future is bright for the Roadrunners.  And of course, Gilmer Buckeye graduating quarterback Brandon Tennison will be going to UTSA next season to tutor under Frank Harris looking forward to his chance to take the reins in the 2023 season hopefully.

Kilgore ArtWalk coming up on Feb. 12 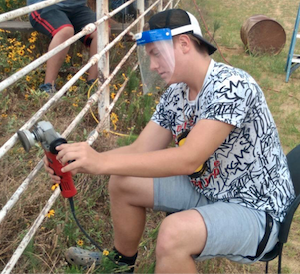 God wants our heart not just our problems