The Gilmer Buckeyes made their second consecutive trip to the Class 4A DII State Championship Game at AT&T Stadium in Arlington Friday afternoon as they took on China Spring, determined to get redemption for last year’s Championship Game loss to Carthage.  They looked like they might be able to do just that.  Sadly, the last play of the half took the wind out of Gilmer’s sails and they were never able to recover in the second half and lost by the score of 31-7.  The Buckeyes are now 3-5 in State Championship games in school history.  The loss ends the season for Gilmer with a 14-2 record while the victory propelled the Cougars to a perfect 16-0.

Gilmer won the coin toss and elected to receive to begin the game.  Grady Flanigan kicked away and the Buckeyes took over on their 32 after a Keith Rockwell return.

Brandon Tennison led the offense down the field in a very long drive for Gilmer but sadly the Buckeyes weren’t able to put any points on the board.  They held the ball for 7:06 and ran 15 plays, but a 27-yard field goal attempt by Jose Hernandez hit the left upright and bounced back on the field, giving China Spring the ball on their 17-yard line with 4:54 left in the first quarter.

Major Bowden moved the Cougar offense methodically down the field and the Black Flag stepped up and forced a 48-yard Thomas Barr field goal attempt.  The kick was short and Rohan Fluellen brought the ball out of the end zone and out the Gilmer 37.

China Spring forced a three-and-out and after a 42-yard Cody Guidry punt the Cougars took over on offense for the second time at their 28.

The Black Flag Defense returned the favor and forced a three-and-out and after a 21-yard Cougar punt Gilmer took over on offense for the third time at their 39.

The Bucks found a wrinkle in the Cougar defense, moving the 61 yards into the end zone in 1:32 and taking 6 plays to get the first score of the game.  The TD came on a 2-yard run by Ashton Haynes with 6:36 left in the first half.  Hernandez added the PAT and Gilmer led 7-0.

After the ensuing kickoff China Spring went back on offense at their 39 after a nice return.

After the kickoff Gilmer got the ball at their 33 following the return.  Tennison moved the offense down the field to the Cougar 5 but after getting a first down the officials didn’t stop the

clock to allow the chains to be reset and the Buckeyes lost at least 6 seconds of clock time.  Gilmer moved to the 4 and with 6 seconds left Hernandez came in to try another field goal.  The kick was blocked by Jacob Mott and it bounced to Gabe Watkins who ran down the right sideline into the end zone 86 yards for a China Spring score as the first half clock ran out.  Barr added the extra point and the Buckeyes and their fans were shocked as they looked at a 14-7 deficit at the half with the Cougars set to receive the second half kickoff.

Hernandez kicked away to begin the second half.  The kick traveled to the Cougar 25 and was returned to the 35.

Bowden took the Cougar offense down to the 4 and the Black Flag forced a 22-yard Barr field goal with 7:25 left in the third quarter.  The drive was 4:38 and garnered 71 yards over 10 plays.  The kick was good and China Spring led 17-7.

Cody Guidry returned the kick from his 27 to the 37 and Gilmer went back on the offensive.

Thanks to back-to-back penalties it was a three-and-out for Gilmer.  After a Guidry punt Bowden brought his offensive unit back out but the Black Flag forced another three-and-out.  Unfortunately, the Buckeyes were short on a 4th and 1 and the Cougars got the ball at midfield.

Bowden led his charges on an 8-play drive that consumed 4:26 off the clock and ended with a 14-yard TD run by Bowden with 8:25 left in the game, effectively putting the game away.  Barr added the point after and China Spring held a commanding 24-7 lead.

Gilmer began at their 49 on their ensuing possession when the kick was popped up.

The Buckeyes turned the ball over on downs when a 4th down Tennison pass fell incomplete at the Gilmer 42 with 7:09 left in the game.

Gilmer began their next drive at their 31 following the kickoff.  The Bucks managed one first down but a 4th down pass fell incomplete and China Spring took over at the Gilmer 40 with 3:33 left in the game.

The Cougars ran out the clock and captured their second State Championship with the 31-7 victory.

When Buckeye Coach Alan Metzel addressed the media in attendance after the game, he summed up what had just happened on the field.

“Played a very good team; very impressed with China Spring and the things they do both athletically and schematically.  They’re a team that is very much worthy of a championship.  My hat’s off to them.  They played right; they played hard.  I felt like we were battling crazy there in the first half and just missed on some opportunities that put us behind the 8-ball.  You know, missed a field goal and then right there at the half where we’re expecting to have this big boost of emotion and feel good and it flips on us. Struggled to recover from that; couldn’t get any offensive momentum.  Felt like our defense kept battling, giving us the ball, but we just weren’t able to take advantage of those opportunities.  Hats off to China Spring.”

We asked Coach Metzel if he considered going for a touchdown instead of the field goal on the last disastrous play of the first half and he replied, “We did.  We talked about throwing a fade and then kicking it, but with 6 seconds that’s a fine line.  If we were at 8, 9, we probably would have, but with 6 I wanted to get that 3.  Obviously, we had the flip.  That was all in that discussion and it didn’t work out in our favor.”

He was also asked what he saw from the China Spring defense that gave the Bucks trouble in the game.

“Well, like I said, they’re talented so they gave us issues.  In the second half it was like we couldn’t get that first down and we had that one time where we had 4th and 1 and we go and they stuff us.  If we get that first down we get a little momentum going, you know.  It was just like we couldn’t quite get the rhythm, whereas in the first half we got a first down.  We scrambled, Brandon put it on somebody.  Once you get that 6th, 7th, 8 play, now you get something going.  We couldn’t ever get there.  That’s on us; we just didn’t get it done.”

We also asked how tough it was to lose a second consecutive State Championship Game.

“I thought this year we battled all the way.  I am so proud of my guys.  To lose, whether it was one point or whatever points, gosh that’s tough.”

While the result of the game was not what the coaches, the team or the fans wanted, the Army of Buckeyes need to appreciate what this team accomplished this season and reflect on all the positives rather than focusing on the negative.

These young men worked their tails off beginning the first Monday in August and gave it their all.  In the past 2 seasons the Buckeyes are 28-4.  Many schools have never even won 10 or more games in a season and the Buckeyes do it year after year.

The sting and hurt will go away down the road and plans will begin in January to start planning for the 2022 season and getting back to AT&T Stadium again.

When you see any of our coaches and players let them know you appreciate their hard work and the great job they did in 2021.  They gave their all and deserve your love and support.

The Buckeyes will be back next year and have another banner campaign.  Thanks for all your hard work gentlemen, and to the 2022 Seniors, we give you our heartfelt thanks for you high school career as a Buckeye and wish you nothing but the best as you take the next step in your future.

Merry Christmas and Happy New Year to all.  Be safe if you’re traveling for the holiday and have a great 2022. 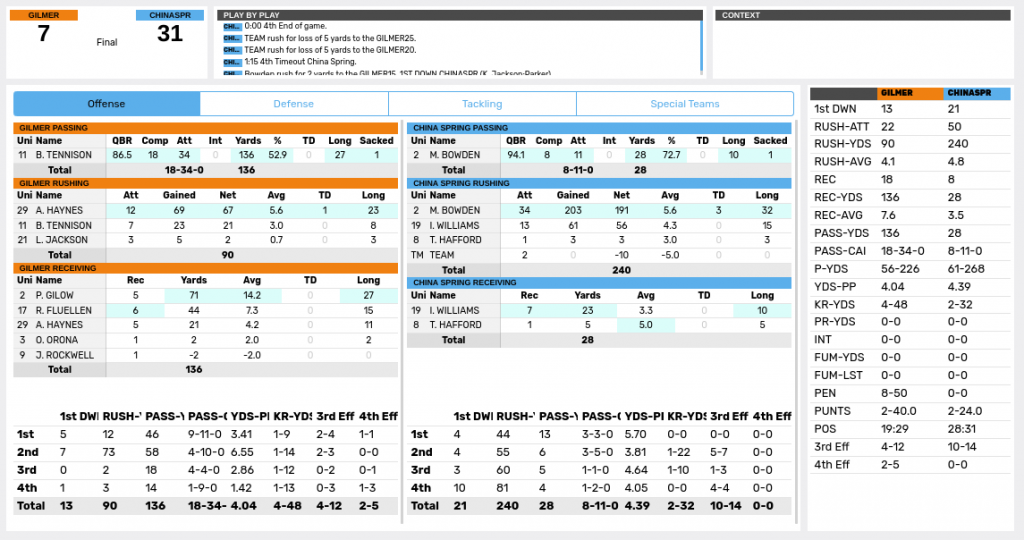 More coverage on the Buckeyes Blog.