The 2-10 Houston Texans entertained the 4-8 Seattle Seahawks at NRG Stadium in Houston Sunday in a game that had no more than around 28,000 fans in the stands and a large number were Seahawks fans.

The ‘Hawks won the coin toss and elected to defer to the second half.

Coach David Culley had announced on Friday that Tyrod Taylor would be benched due to his ineffectiveness in leading the offense after coming off an injury earlier in the year.  He said he felt rookie Davis Mills had learned a lot from being thrown into the fire as a rookie when Taylor was out and was confident he could lead the team successfully the final 5 games of the season.

On the first possession it looked as though Culley was right on his decision.  Mills moved the ball 75 yards down the field after a touchback on the opening kickoff.  The drive for the TD was 7 plays and took 3:58 off the clock.  The score came on a 5-yard pass from Mills to Brevin Jordan with 11:02 left in the opening frame.  Ka’imi Fairbairn added the PAT and Houston had an early 7-0 lead.

Russell Wilson led the Seahawks right down the field on their first possession until the Texans came up with a defensive stop on 3rd down that forced a Jason Myers 38-yard field goal attempt.  The kick was good with 6:20 left in the first quarter and Seattle cut the lead to 7-3.  The drive was 9 plays, 56 yards and took 4:42. 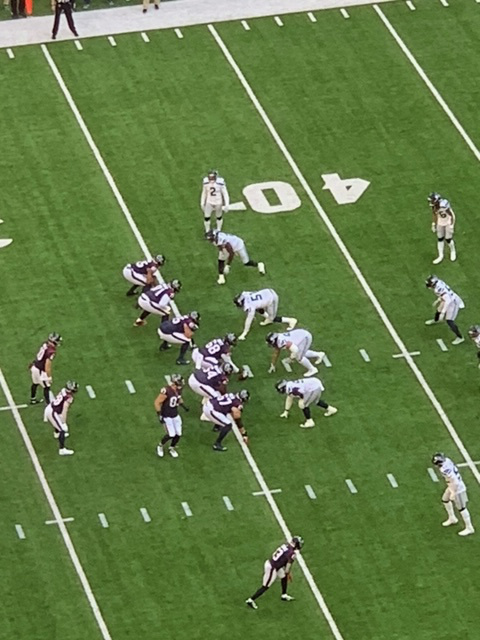 Houston began their second possession at the 25 after another touchback.  They were not able to pick up but one first down on the possession and following Cameron Johnston punt Wilson brought his unit back on the field at the Seattle 3.

Wilson led his offense 97 yards into the end zone for a TD on the last play of the first quarter.  Rashaad Penny ran around right end for a 32-yard score.  Myers added the extra point and Seattle took their first lead of the game, 10-7.  The drive took 7 plays and 3:03.

Houston kicked a 49-yard field goal that tied the game but Seattle was called for a 15-yard penalty for roughing the snapper and the ball was moved down to the Seahawk 16 and Houston got a first down to attempt to get into the end zone and take the lead back.  They appeared to do that but on review Brandin Cooks was stopped at the 1.

There was no additional scoring in the first half until Russell Wilson hit Tyler Lockett on a 55-yard TD pass on the first play following a Houston punt.  The drive took just 8 seconds.  Myers PAT kick was wide left, but the Seahawks recaptured the lead 16-10.

Houston got a 43-yard return on the kick following the score and went into their 2-minute offense hoping to get a score before the final 52 seconds of the half ran off the clock.  Mills moved the team to the Seahawk 40 but a holding penalty on the Texans forced a 61-yard field goal attempt by Fairbairn on the last play of the half.  The kick was good and Houston cut the deficit to 16-13 at the halftime intermission.  The drive was 6 plays, 15 yards and took 52 seconds.  The kick was the longest of Fairbairn’s career and the longest in the history of NRG Stadium.

The teams exchanged punts until Seattle got into field goal range.  Myers booted a 38-yard field goal with 4:32 left in the third quarter putting the Seahawks up 19-13.  The drive was 9 plays, 60 yards and took 4:59 off the clock.

Seattle put the final nail in the coffin with 7:28 left in the game when Wilson hit Gerald Everett for what was ruled as a 7-yard TD.  After a video review the call stood even though from one of the TV angles Everett was stopped short of the goal line.  The Seahawks went for a 2-point conversion and Wilson hit Lockett, putting Houston down by 14 points at 27-13.  The drive was 10 plays, 67 yards and took 4:10.

The Seahawks added insult to injury when Penny scored on a 47-yard run with 5:26 left in the game.  The drive was 2 plays, 50-yard and took 50 seconds off the clock.  Myers try for the extra point hit the right upright and was no good but Seattle had a commanding 33-13 lead.

Coach David Culley was asked after the game how bad he felt with the team having such a bad record.

“It always feels bad because the record is what it is and that’s not very good. You’re right, that is not what we expected. But at this point we are basically just looking every week to get the next win.  With this football team right here, I feel like I’ve got a great bunch of guys in this locker room that will do everything that we need to do to get it corrected. We just have not been able to get that done and that’s on me.”

As you would expect the tone was much more positive when Seattle Coach Pete Carroll addressed the media after the win.

“Well, we had a really nice day today. Took us a while to get going. They had a nice opening drive, a really good drive and then our guys settled in and did a really good job on the defensive side of the ball. Again, holding the guys to 60 yards, 70 last week, that’s really consistent play from a team that is trying to be balanced and all of that, so that’s a nice job and I’ll take those all day long. Again, we get a shutout in the second half, played really good, it much be those half time adjustments.”

The Texans hit the road next Sunday to take on the Jacksonville Jaguars.  They are hoping to get a second win against the Jags who they beat in the first game of the season.  Jacksonville is struggling as bad as Houston.  Both teams will enter the contest with 2-11 records.