High school football in Gilmer first kicked off in 1914. That makes this the 108th season of players playing, coaches coaching, and little boys dreaming of taking their turn under Friday Night Lights. During that time, the boys from the Seat of Upshur County have gotten pretty good at it. The skill and talent on display from the Buckeyes and the Dragons in the past century put Gilmer on the map as a “football town.” And the incredible success the Buckeyes have had in this century have only strengthened that reputation.

To see the 2021 Buckeyes enjoying another stellar season is not surprising. But football fans should not overlook the historic significance of the best back-to-back season performance in school history we are witnessing now. Last week, the Buckeyes spent their 15th Thanksgiving Morning in a row getting ready for their next playoff game, advancing once again to the “Great 8” teams remaining in the state playoffs. This week, they play in the state semi-finals, reaching the “Final 4” for the second season in a row.

“Gilmer being Gilmer” a visiting reporter commented after another Buckeye touchdown pass Friday night in Mt. Pleasant. “This is just what they do.” Gridiron success and Gilmer have become synonymous. Out of more than 1,000 Texas High Schools playing football, only 15 have reached a total of 700 program wins. Of course, Gilmer is on that list. It has been this way the entire lives of every current player who grew up watching Buckeyes be Buckeyes, then playing on their televisions as Longhorns and Aggies and Sooners and Bears, then as Cowboys and Panthers and Steelers and Bills. Two former Buckeyes are now members of the same NFL defense in Minnesota, just as they were in Gilmer 8 short years ago as Buckeyes. The odds of high school teammates becoming NFL teammates are over 1 in 16 Million. The additional odds of their same high school coaches going on to build another championship program and National Coach of the Year honors at the NCAA D1 level are essentially incalculable. But this is Gilmer football we are talking about. As a recent post on an East Texas chat board stated, “Gilmer gonna Gilmer.” It seems that football success is so expected, our town is now a verb. 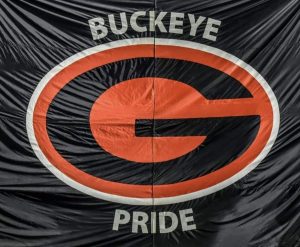 So with high school football playoffs abuzz with Gilmer in the State Semi-Finals again this year, what’s the big deal? Buckeyes being the Buckeyes. Sounds about right. It’s Gilmer.

Most folks know by now that November began with the Buckeyes winning their second straight, undefeated District Championship Title, followed now by 5 victorious playoff championships in a row. But the way these 2021 Buckeyes have done it is unprecedented. The fact is, we have never seen a stretch like the past five weeks. The numbers never lie. After a week of checking and rechecking over a century of statistical data, it is simply inarguable. The roll these Buckeyes are on is the best ever. And that folks, is a big deal.

“Trophy Time” is the phrase Coach Jeff Traylor coined to describe this time of year. It is when the winners get another championship trophy, and the losers move indoors to begin winter sports activities. These games are more than meaningful for coaches and players alike. They are the games that matter most, defining the identities of seasons and team success for all time. And “Trophy Time” historically in Gilmer has packed the trophy cases full, inscribed with the names of some legendary players on some incredible championship teams.

The Buckeyes have played for the ultimate trophy in 1981, 2004, 2007, 2009, 2012, 2014 and 2020, winning three of those contests to cap off undefeated seasons in 2004, 2009 & 2014. During that time, combined teams from 2003-2004, 2008-2009 and 2013-2014 shared the record for the most Playoff Championships won in back-to-back seasons, adding 9 Golden Footballs each to the trophy case on Bradford Street. All those teams finished with State Championship Titles. As of today, those teams are now tied for second in this category, as Coach Alan Metzel’s 2020-2021 Buckeyes Friday night posted a new record of 10 trophies… and counting. That is now also the best ever start for any new head coach in Gilmer’s storied history. With a 27-3 record and back-to-back Final 4 appearances in their first two seasons already, this coaching staff has led this team to a mountain of impressive statistics.

In the past 5 weeks against playoff competition, they are outscoring their opponents 286-109, scoring 40 touchdowns literally every way a touchdown can be scored. Rushing, passing, fumble return, kick return, interception return, all “House Called” for TDs since November 3rd. The “Black Flag” has stone-walled their opponents in first and goal opportunities 6 out of the last 8 drives. The offense has outgained their opponents by a 2:1, averaging almost 10 yards and a point on the scoreboard per offensive play, and they have moved the ball over a mile and a half on offense, generating fourteen 1st downs for each time they have punted the ball. Special-teams units have been equally impressive for the Buckeyes, with a field-flipping kicking and return games, converting 1 & 2 point attempts at a record pace and even denying opponents desperate to “catch-up” on onside kick attempts. This stellar execution in all three phases of the game in “Trophy Time” has run up a football efficiency score against state playoff competition that is the highest we have ever seen from any Buckeye team, and that is saying something.

I will not bore you with the myriad of other school records being re-written with every game as the Buckeyes advance in these playoffs, but what is “Efficiency” as a football statistic and how does that illicit the heady compliment of “Best Ever” for these 2021 Buckeyes? It is complex formula, designed to measure “how good a football team really is.” When you see publications today listing high school and college team rankings, or professional “Power Rankings,” you are seeing the results of efficiency scores. In simplest terms, this statistic measures what a team has an opportunity to do against each opponent each week, compared that to what it actually does against those opponents each week. This calculation builds a “degree of difficulty” factor into each game, as it considers every play for all three phases of the game and the efficiency score of each opposing team for those plays, and then rewards each team for actual outcomes when they compete.

When these numbers are crunched for these 2021 Buckeyes (with special thanks to Joe Dodd and Mark Skinner for providing current and historical data), the undeniable conclusion is since “Trophy Time” began 5 weeks ago, this is the most efficient football Gilmer, Texas has ever seen. To put it in perspective for football fans, the most efficient statistical team in college football history was the 2019 National Champion LSU Tigers led by their quarterback Joe Burrow, who won the Heisman Trophy by the largest voting margin ever. That LSU team posted an efficiency score in their undefeated SEC season approaching an unprecedented 200 points, led by the highest college quarterback rating ever seen of 202. That makes those LSU Tigers (on paper) the best college football team ever.

For comparison over the last 5 games, Gilmer’s football efficiency numbers are even higher. With a score just north of 200 and a quarterback rating of over 225, no Buckeye team has played better all-around football than what we are seeing right now. Only the 2014 Buckeyes scored more points over a 5-week playoff run, and although both the 2009 and 2004 Buckeye Championship Teams posted comparable efficiency numbers for individual games, these 2021 BUX have averaged it for over a month. For Buckeye fans who rightfully recount amazing statistics from unforgettable championship teams, we have done the math. And statistically speaking, these 2021 Buckeyes are not just raising the bar against playoff competition, they are the bar.

Since 1924, (26 years before “Thee Ohio State University” mind you), the Gilmer High School mascot has been known as the “Buckeyes”. And since 1929, their fans have earned a nickname bestowed upon Gilmerites who would roll into an opposing team’s town in columns to support their son’s efforts in such full force, it was described as “…an invading army…”. If we were to calculate a score for “Buckeye Fan Efficiency” we would start by counting anyone breathing who ever said “I’m from Gilmer, Texas” who also has the opportunity to be in Prosper this coming Friday night. Then we would divide that by how many of those fans are in the stadium in Prosper by kickoff at 7:00pm. This is Gilmer. So, I would expect another stratospheric efficiency score from the famous “Army of Buckeyes” to show up in full force.

This week’s State Semi-Final game is against the Celina Bobcats. Celina, Texas is known as “Title Town, Texas” due to their history of winning 20 State Championships across 6 sports. The population there is over three times that of Gilmer’s at almost 17,000 and growing larger every day. Due to UIL re-alignment in 2022, that population growth likely makes this the last time the Bobcats and Buckeyes will ever square off with trophies on the line. No Gilmer team has ever earned the right to play for a State Championship in back-to-back years. History will take note on Friday night. Gilmer is sending a team that the numbers say is playing the best football ever seen. So Gilmer should also be sending an Army.

That Army of Buckeye fans may be outnumbered on Friday night from a city three times its size, but the numbers who are in the stands will show these 2021 Gilmer Buckeyes how much their town is behind them. The numbers on the scoreboard at the end of the game will show us that Army’s logistical plans the following week. And the numbers listed below show just how difficult it is going to be to keep these Buckeyes from completing some unfinished business before they are done in 2021. These are unprecedented times in Buckeye Football history. Even by Gilmer standards. Come Friday night at 7:00 in Prosper, we’ll gather again to “Gilmer.” See you there.

EDITOR’S NOTE: The author of this article has asked to remain anonymous.