The 2-9 Houston Texans returned to NRG Stadium in Houston Sunday for their second of three consecutive home games to take on the 6-6 Indianapolis Colts in an AFC South matchup.  Houston lost at home last Sunday to the New York Jets and Indianapolis lost at home to the Tampa Bay Bucs.  Houston is in a tie with Jacksonville for last in the division but technically is in third place since they defeated the Jags in Houston in the first game of the regular season.  Tennessee is on top with an 8-4 record and the Colts 6-6 ledger was good enough for second place going into the game.

The Colts won the coin toss and deferred to the second half.  Michael Badgley kicked the ball into the end zone and Houston and Tyrod Taylor set up shop at their 25 to begin the game.  On the first play of the game Taylor was picked off on a short sideline pass by Kenny More II on the Houston 29 and just like that the Texans were in a hole.

Carson Wentz brought the Indy offense out after the gift just 5 seconds into the game.  It took just 6 plays and 3:29 for Wentz to get the Colts on the board for the first time.  Jonathan Taylor ran in from the 1 with 11:26 left in the first quarter after taking a direct snap out of the Wildcat formation.  Badgley hit the PAT and the Colts had a 7-0 lead and never looked back from that point, winning the game easily by the score of   .

Houston mounted a drive on their next possession but Pharaoh Brown fumbled at the Indy 49 and Xavier Rhodes recovered the loose pigskin and Indy was back on the field on offense again.

The Texans came up big on a third down play, forcing Badgley to come in for a 35-yard field goal.  The kick was no good and Houston went back on offense at their 25.  It was a quick three-and-out and following a Cameron Johnston punt that set the Colts up on their 28 on their third possession of the day. 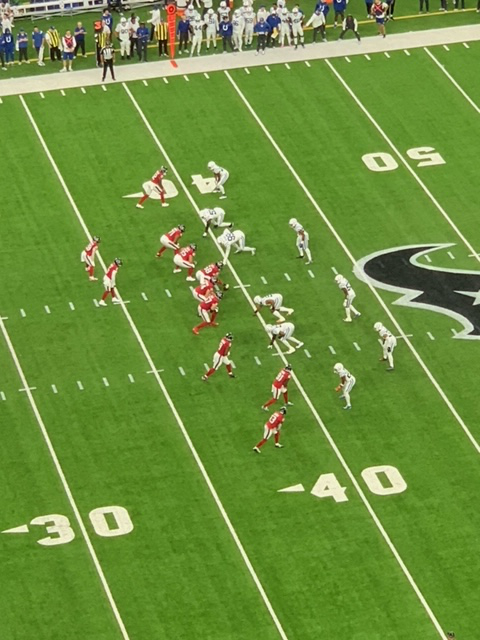 The visitors moved down to the Houston 42 but a bad Wentz passed forced a Rigoberto Sanchez punt that resulted in the Texans starting at their 1 after Ashton Dulin downed a 40-yard kick.  Houston went three-and-out again the Colts took over on their 45 after a Johnston punt.

There was no further scoring in the first half until the Colts got into the end zone with 43 seconds left when Wentz hit Dulin on a 3-yard TD pass.  Badgley added the extra point and the Colts led 14-0.  The drive was 11 plays, 54 yards and took 6:16 off the clock.

Houston kicked off to begin the second half of play and following the Fairbairn kick Indy took over on their 25 after a touchback.

Neither team threatened the remainder of the third quarter but Taylor left the game prior to the Texans final possession of the quarter with a left hand injury and Davis Mills came in to finish up the game at quarterback.

Mills moved the team down to the Indianapolis 41 but a 4th down pass fell incomplete and the Colts took over on downs.

Wentz took advantage of the opportunity and drove his offense down the field and had a 1st and goal at the Houston 5.  The Texans defense stiffened and forced a 23-yard Badgley field goal with 9:08 left in the game, bringing the score to 24-0 in favor of the visitors.  The drive was 8 plays, 55 yards and took 5:08 off the clock.

The final score of the game came when Deon Jackson ran into the end zone from the 3 on a 3rd down play.  The score came with 1:56 left in the game.  Badgley added the extra point and the embarrassing score moved to 31-0 in favor of the Colts.  The drive was 9 plays, 40 yards and took 3:33.

Houston had used all of their time outs prior to getting the ball back and ran the clock down to 41 seconds and the ball turned over on downs back to the Colts.  They went into victory formation and the clock expired.   The victory moved Indianapolis to 7-6 on the year and the loss drops Houston to 2-10 with 5 games remaining in the regular season.

When Coach David Culley met with the media following the horrific loss in a game where almost nothing went right he gave only short answers to questions posed to him.  In an opening statement, he said, “First of all, I want to congratulate Frank (Reich) and the Colts. They completely outplayed us. He had them ready to play. They did a great job today. That’s a good football team, and we got outcoached and outplayed. But a lot of that had to do with them.”

When he was asked what was causing his team to struggle offensively, he responded, “Just consistency, we don’t have the consistency. We’re still having some breakdowns. We’re not good enough to be able to play behind the chains when we have formation issues, when we have penalties. And basically, those things put us behind the chains, and when you do that, we’ve got no chance to do that.”

The bottom line is the Texans are a terrible team and they simply don’t have the talent to win consistently in the NFL.  The question is if owner Cal McNair will have enough patience with Culley to give him the time to rebuild the team and the money to sign quality players to get the team respectable.  Stay tuned.  Regardless of what happens there will be drama!