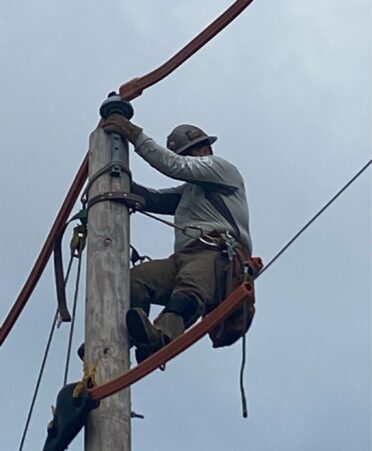 As he pursues an Associate of Applied Science degree — he expects to complete it by next summer — Mendoza looks forward to a future career where he can find fulfillment.

“I’ve had jobs where I’ve worked at a computer, and I just didn’t enjoy it,” he said. “I like to be outside. I like to work with my hands. I feel more accomplished that way.”

What brought you to TSTC?

I was originally going to get into a different program — something I was more familiar with. I did HVAC as a teenager. I was coming off of an active-duty assignment with the National Guard, and I figured it was time to go to school.

Actually, I called and inquired about the HVAC program at the school, and they said they had Welding (Technology) and Electrical Lineworker (Technology) open. I told them I’d look into them and take some time to chew it over.

Why did you choose the Electrical Lineworker Technology program?

The more and more I looked at electrical lineworking, it seemed like it filled a need that was always going to be present. You can’t do anything without electricity nowadays, so I settled on that one.

How has your experience with the program been?

It’s been good. It’s definitely been more challenging to some than others, but it kind of comes with what your background is — how you’re used to working. If you’re used to working long hours in the elements, then it really isn’t a big deal. I felt like I kind of fell right in, and I like to work like this.

What advice do you have for prospective students interested in lineworking?

Definitely be in shape. It exercises muscles that you’re not used to using. It will wind you. Also, if you’re afraid of heights, you better make peace with that. You can trust your equipment.

What do you hope to do once you have earned your degree?

I’m single. I don’t have any kids. I’m not necessarily tied to the Houston area. I could basically go work anywhere.

Ultimately, what I’d like to do probably later on, when I’ve achieved a journeyman’s license and things of that nature, I’d like to go work high-voltage from helicopters. There are a couple companies that do it, but they’re kind of far and in between — especially here in Texas. They do exist, but I’d probably have to do some moving around. I think that would be a good time, and I feel like that would be something to do once I have quite a bit of experience under my belt doing distribution-level stuff. I feel like it would be something I’d like to do.

In Texas, lineworkers can earn an average annual salary of $55,880, according to onetonline.org, which adds that the number of lineworker positions in the state will likely grow by 16% through 2028.

This program is part of TSTC’s Money-Back Guarantee. If participating TSTC graduates do not find a job in their degree field within six months of earning their degree, the college will refund their tuition.

Registration for the spring semester is underway. For more information about TSTC, visit tstc.edu.

A boil-water notice in Houston made national news. In rural Texas, it’s a way of life.