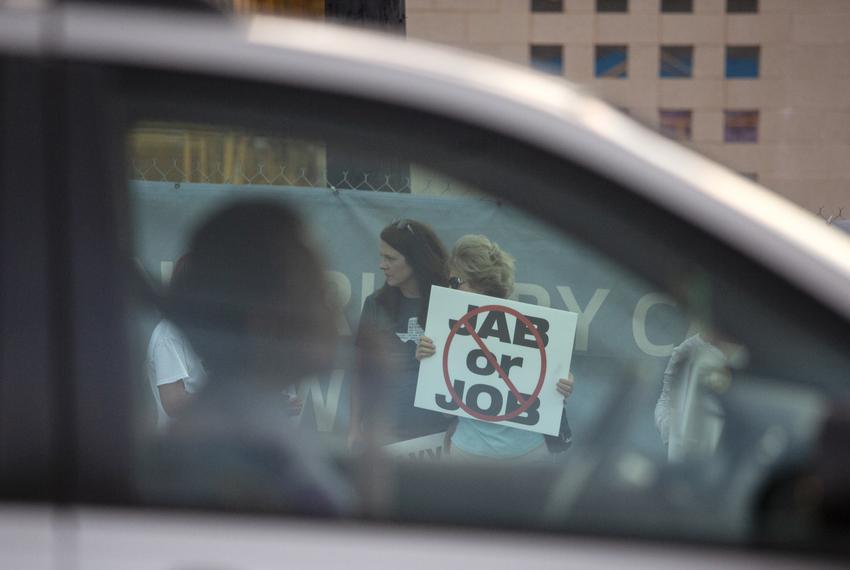 Protesters rallied against Houston Methodist Hospital’s COVID-19 vaccine mandate outside the Baytown facility on June 7, 2021. Several employees who chose not to inoculate themselves worked their last shift that day and were facing job termination, a policy criticized by the protesters as unfair and unauthorized. Credit: Pu Ying Huang for The Texas Tribune

By Kailyn Rhone, The Texas Tribune

“Judge blocks Biden administration’s COVID-19 vaccination mandate for health care workers after Texas, other states sue” was first published by The Texas Tribune, a nonprofit, nonpartisan media organization that informs Texans — and engages with them — about public policy, politics, government and statewide issues.

A federal judge on Tuesday blocked the Biden administration’s COVID-19 vaccination mandate for health care workers from going into effect nationwide next week after Texas and other states challenged the order.

Doughty wrote in his decision that the mandate exceeds the Biden administration’s authority.

“If human nature and history teach anything, it is that civil liberties face grave risks when governments proclaim indefinite states of emergency,” Doughty wrote.

The Biden administration issued an emergency order, which went into effect Nov. 4, requiring eligible workers at health care facilities participating in the Medicare and Medicaid programs to get the first shot of a two-dose vaccine or a one-dose vaccine by Dec. 6.

This article originally appeared in The Texas Tribune at https://www.texastribune.org/2021/11/30/vaccine-health-care-workers-blocked/.