““People should probably be worried”: Texas hasn’t done enough to prevent another winter blackout, experts say” was first published by The Texas Tribune, a nonprofit, nonpartisan media organization that informs Texans — and engages with them — about public policy, politics, government and statewide issues.

This story was reported and written as a partnership between The Texas Tribune and NBC News.

MIDLOTHIAN — After last winter’s freeze hamstrung power giant Vistra Corp.’s ability to keep electricity flowing for its millions of customers, CEO Curt Morgan said he’d never seen anything like it in his 40 years in the energy industry.

During the peak days of the storm, Vistra, Texas’ largest power generator, sent as much energy as it could to power the state’s failing grid, “often at the expense of making money,” he told lawmakers shortly after the storm.

But it wasn’t enough. The state’s grid neared complete collapse, millions lost power for days in subfreezing temperatures and more than 200 people died. 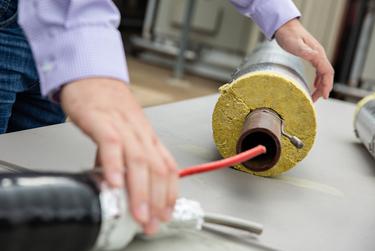 Since the storm, Texas lawmakers have passed legislation aimed at making the grid more resilient during freezing weather. Signing the bill, Gov. Greg Abbott said “everything that needed to be done was done to fix the power grid.”

But Morgan isn’t so sure. His company has spent $50 million this year preparing more than a dozen of its plants for winter. At the company’s plant in Midlothian, workers have wrapped electric cables with three inches of rubber insulation and built enclosures to help shield valves, pumps and metal pipes.

No matter what Morgan does, though, it won’t be enough to prevent another disaster if there is another severe freeze, he said.

That’s because the state still hasn’t fixed the critical problem that paralyzed his plants: maintaining a sufficient supply of natural gas, Morgan said.

Natural gas slowed to a trickle during the storm, leaving the Midlothian facility and 13 other Vistra power plants that run on gas without enough fuel. The shortage forced Vistra to pay more than $1.5 billion on the spot market for whatever gas was available, costing the company in a matter of days more than twice the amount it usually spends in an entire year. Even then, plants were able to operate at only a fraction of their capacity; the Midlothian facility ran at 30% of full strength during the height of the storm.

“Why couldn’t we get it?” Morgan said recently. “Because the gas system was not weatherized. And so we had natural gas producers that weren’t producing.”

If another major freeze hits Texas this winter, “the same thing could happen,” Morgan said in an interview.

VIDEO: Natural gas powers the majority of electricity in Texas, especially during winter. Some power companies say the state’s gas system is not ready for another deep freeze. Credit: Justin Dehn and Mitchell Ferman / The Texas Tribune

Having trouble viewing? Watch this video on texastribune.org.

The predicament in Midlothian reflects a glaring shortcoming in Texas’ efforts to prevent a repeat of February, when a combination of freezing temperatures across the state and skyrocketing demand shut down natural gas facilities and power plants, which rely on each other to keep electricity flowing. The cycle of failures sent economic ripples across the country that cost hundreds of billions of dollars.

The power and gas industries say they are working to make their systems more reliable during winter storms, and the Public Utility Commission, the state agency that regulates the state’s power industry, finally acted on recommendations made by federal regulators a decade ago after another severe winter storm.

But energy experts say Texas’ grid remains vulnerable, largely because newly written regulations allowed too much wiggle room for companies to avoid weatherization improvements that can take months or years. More than nine months after February’s storm — which could exceed Hurricane Harvey as the costliest natural disaster in state history — a lack of data from regulators and industry groups makes it impossible to know how many power and gas facilities are properly weatherized.

For millions of Texans, that means there is no assurance that they will have electricity and heat if another major freeze strikes the state.

“If we see a recurrence of the storm we saw last year, people should probably be worried,” said Adrian Shelley, director of the Texas office of Public Citizen, a consumer-advocacy nonprofit group.

The stakes are high, and not just for Texas, the nation’s top energy-producing state. Its winter preparedness affects customers as far away as California and Minnesota and is a test of America’s ability to deal with climate change, which is making weather more extreme, more unpredictable and more deadly.

“Extreme weather events, such as the one in February 2021, are unfortunately becoming more commonplace and the electricity ecosystem needs to come together to plan for and prepare to operate under more extreme, longer duration, and wide area weather events,” Jim Robb, president and CEO of the North American Electric Reliability Corporation, said in a statement.

His organization published a joint report with the Federal Energy Regulatory Commission this month that detailed the failures of both the power and natural gas industries to protect against February’s storm, despite recommendations by federal agencies after a similar disaster in 2011. That storm caused rolling blackouts — but no deaths — across much of the state over three days as then-Gov. Rick Perry asked Texans to conserve electricity.

Although the natural gas industry has blamed electricity generators for the February blackouts — claiming that gas slowed only after power was cut to their facilities — the report said that freezing temperatures were the main cause of a sharp decline in natural gas in Texas and neighboring states in the early days of the storm that triggered a cascade of outages. 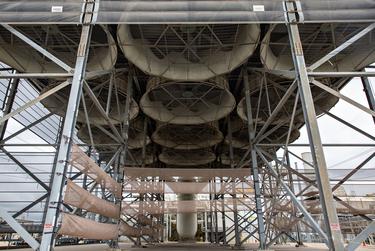 But federal regulators have little say in how the Texas grid operates.

The main Texas grid is an island, not connected to the country’s two major power grids. This is by design, the result of actions by state leaders decades ago to avoid federal regulation and encourage free-market competition. Multiple state agencies, as well as a nonprofit organization — the Electric Reliability Council of Texas, or ERCOT — govern the grid’s operations, writing rules based on laws passed by state lawmakers.

The lawmakers responded to February’s disaster by passing legislation aimed at improving the power system’s preparedness for winter. It established weatherization mandates but left it to state regulators to implement them.

The Public Utility Commission followed with a rule enacting the weatherization requirements. But the rule allows power plants to request an exception if they document their efforts to comply, explain why they couldn’t and submit a plan to do so later. 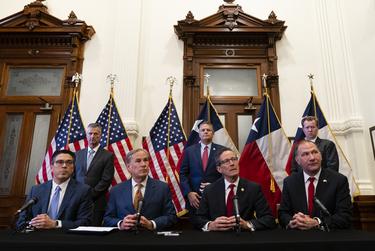 The Texas Railroad Commission, which regulates the natural gas industry, is working more slowly. A proposal published in September — and expected to be finalized Dec. 1 — lays out a timeline that would identify, map and impose weatherization mandates by early 2023 for gas producers that supply power plants. It also seeks to prevent a repeat of a major paperwork error that resulted in dozens of natural gas providers having their power cut off during February’s rolling blackouts because they failed to declare themselves “critical infrastructure.”

But the proposed rule, which the Railroad Commission said was written to reflect the language in the new state law, allows gas companies to opt out of that classification and avoid having to weatherize their equipment. That infuriated many legislators, despite the fact they’d voted for the law that allowed it after lobbying by the natural gas industry.

The result is that Texas has done “next to nothing” to weatherize its natural gas supply, said Doug Lewin, an Austin-based energy consultant.

“We don’t have a regulatory system in place that holds the industry accountable. That is the problem,” Lewin said. “It’s not a technology or engineering problem. It’s a regulatory problem.”

Natural gas fuels a majority of power generation in Texas, especially in winter. At one point during February’s storm, more than half of the state’s natural gas supply was shut down due to power outages, frozen equipment and weather conditions, ERCOT said, adding that at least 20% of the total outages during the week of the storm was due to power plants not getting enough gas.

The natural gas industry has been among the most politically powerful in Texas for generations and has donated generously to the campaigns of governors, lawmakers and the Railroad Commission. That contributes to a culture in which gas companies have escaped strict weatherization mandates, energy experts and consumer advocates say.

The Texas Oil and Gas Association, one of the most prominent energy lobbyist groups in Texas, defended the gas industry’s image in a public relations campaign after the storm. It also has had a heavy hand in deciding who sits on an informal advisory council that lawmakers codified after the storm, intended to ensure energy and electricity operations continue during extreme weather. 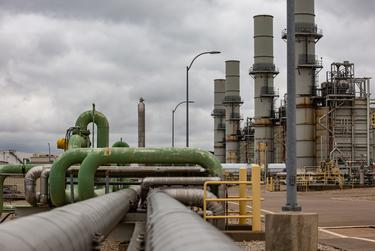 Energy providers like Vistra are preparing their power plants for extreme weather conditions following the February winter storm, which shut down power across Texas and caused hundreds of deaths. Credit: Shelby Tauber for The Texas Tribune

Industry group: Natural gas system will be prepared for winter

Todd Staples, president of the Texas Oil and Gas Association, said gas companies already weatherize to varying degrees and “are working with a sense of urgency.”

The best thing that can be done to avoid a repeat of February is for power companies to get access to larger amounts of stored gas ahead of a storm, he said in an interview this month.

Staples said more than 1,000 facilities — out of more than 250,000 statewide — have filled out paperwork to be added to the list of “critical” facilities that won’t have their power cut off. That’s up from just 60 before the storm, Staples said.

He said the industry would be prepared for winter, including having more gas in storage. “If the power is kept on, natural gas will continue at a reasonable level,” Staples said.

Oncor, Texas’ largest electricity transmission and distribution company, which delivers power to 3.8 million homes and businesses, said since the February storm it has received 1,061 forms from gas companies declaring their infrastructure as critical, a sign those companies are likely to be weatherized and prepared to operate during a grid emergency. AEP Texas and CenterPoint Energy, which together service more than 3.6 million Texas households and businesses, said they have received another 278 forms from gas companies registering their facilities as critical.

Several of Texas’ largest natural gas producers, including XTO Energy and Apache Corp., did not return calls or emails seeking comment on their weatherization efforts. Spokespeople for BP and Devon Energy declined to comment.

And the Railroad Commission said it did not know how many natural gas companies are actually prepared for winter. An agency spokesperson said ERCOT would have this information.

As the Railroad Commission works on its weatherization rule, electricity companies — including Oncor, AEP Texas, CenterPoint and Texas-New Mexico Power Company — have already begun criticizing the proposal. The companies filed a comment with the commission arguing that the proposed rule was too vague and “does not provide information electric utilities will need in order to efficiently and effectively incorporate natural gas facilities into their respective” emergency plans.

Virginia Palacios, executive director of Commission Shift, an organization that researches the Railroad Commission’s ties to the oil and gas industry, said the long process of creating new weatherization rules has prevented Texas from preparing for this winter.

“We are not going to have any assurances that operators are weatherizing for this winter,” Palacios said. “And probably not for the next one.”

Disclosure: CenterPoint Energy and Oncor have been financial supporters of The Texas Tribune, a nonprofit, nonpartisan news organization that is funded in part by donations from members, foundations and corporate sponsors. Financial supporters play no role in the Tribune’s journalism. Find a complete list of them here.

This article originally appeared in The Texas Tribune at https://www.texastribune.org/2021/11/29/texas-power-grid-winter-storm/. 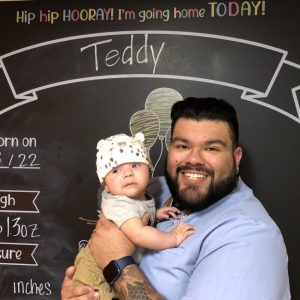