TwitterEmail
| logout
By JOYCE DUNCAN PAYNE
Recently I painted a greeting card showing a cluster of red grapes on a vine beside some pink roses. I titled the card “The Days of Wine and Roses” in remembrance of days gone by and how it used to be.
Once again I was that 16-year-old girl living in a small East Texas town called Gilmer. What a wonderful place to grow up.
Everyone looked out for each other. It was safe for a young girl to push her doll buggy several blocks down Montgomery St. to visit her childhood friend. Or, a young girl could safely walk around the town square or to the city park or my favorite, the library.
Mine was a charmed life and I lived it to the fullest. Now, in my golden years of retirement I am so blessed to live on our ranch near Gilmer in Upshur County.
I am inspired to share some memories of “how it used to be” and how different things are today.
It was in the year 1946. World War II had ended. Servicemen and women were returning home. Gilmer was a different town from today.
People came from all over Upshur County to do their shopping. Farmers came in their farm wagons, some on horses some in area school buses and a few people had cars. 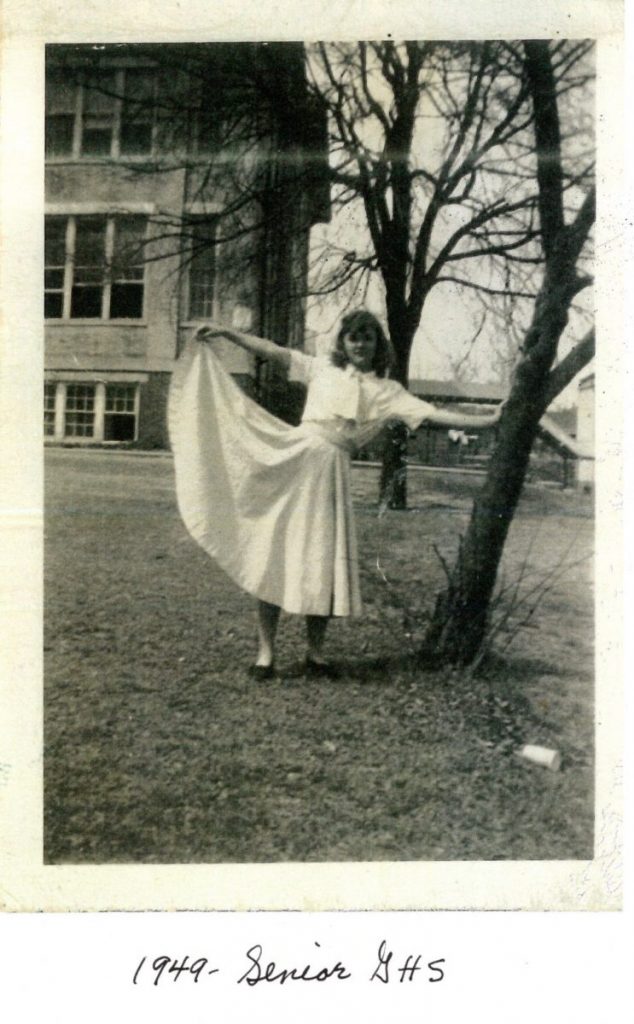 JOYCE DUNCAN PAYNE in front of what was then Gilmer High School on Trinity St.

Sidewalks in downtown were so crowded you could hardly walk around the square, especially on Saturdays. Only a few people had cars and it was a common thing for strangers to find an empty car and get in to take a rest.

Gerald recalled his Uncle Jess parked on the square and when they returned several people would just get out and leave without a word. Such was the trust of people in those days.
We remember when a “date” meant going to the Crystal Theater on Saturday night (the only night that I could stay out past 10 p.m.) There we watched a sentimental love story such as “September Song” sung by Walter Brennan with lyrics such as “the days dwindle down to a precious few” and “these days I’ll spend with you.” (What wonderful sentiments which have come to pass for I was dating a young sailor boy named Gerald Payne.)
Today I am spending those days with him, soon to be 70 years of marriage.
After the movie we jumped in his Army jeep and headed for Foy Knox’s drive-in where a cute car-hop brought burgers and fries. If Gerald had removed the rag-top from the jeep, sometimes there would be several teenagers hanging on. What fun we had!
Sometimes after the movie we would take a walk around the town square to window shop. All the stores kept display windows well lit. Young girls like me loved looking at the sparkling diamond rings at Simpson’s Jewelry Store and at the pretty dresses and shoes at Beall’s clothing store. Hudgins also had lovely displays of men’s and women’s clothing.
Often, while walking down the sidewalks late at night we would meet the night watchman shining his flashlight all around reminding me of the song “The Old Lamplighter of Long, Long Ago.” One line said, “He’d pass the lamp and leave it dark if there were lovers in the park.” Life was simple then.
But the harsh reality was that the Great Depressionstill had its cruel grip on the nation. Jobs were non-existent; the winters were bone chillin’ cold and people had a hard time putting food on the table. One memory that is vivid in my mind: I was ten years old. We lived near the First Methodist Church, very close to the railroad.
Many men (we called them hobos) rode freight trains from town to town in search of a job.
When they learned that our mother would take food from our table and set at least two plates full of food on the front porch, they would come to our house. There they sat down and ate a hearty, hot meal. They were so thankful that if they had a nickel or dime they would leave it on the plate. Mother did not want or expect any payment, she just wanted to serve humans any way she could.
She was just that way. She lived by the motto “It is better to give than receive.”
Time marched on. I grew up in Gilmer except for a few years when Dad moved his large family to the country where we could grow a garden and also have cows and chickens to supplement the food supply.
Living in the country was a whole new world for me. We had to learn to make do with a lot less than when we lived in town. For a short time there was no electricity, no modern conveniences and no walking to town. But as the saying goes: “Tough times make tough people” and we learned many valuable lessons in that time.
We returned to live in town when I had just turned 16. Talk about one happy camper!
We moved to a pretty white house on Allen St. That street was loaded with school kids because it ran right by the elementary school house.
By then I was in high school and had to walk a mile to the high school on Trinity St. But, oh how I loved school and loved getting re-acquainted with friends I had not seen for a few years. I truly loved school, especially Mrs. Hart’s English class and Mr. Jones’ typing and shorthand classes.
It was a short time until Gerald Payne came along and fetched me from the high school boys. I had been dating the football quarterback, but it didn’t take long for Gerald to leave him standing in the dust.
Oh my! What a lucky break for me. We dated for a few years, then headed for Dallas to find jobs. When he landed a good job with General Electric in 1952, he then asked me to marry him. Need I say I accepted, and the rest is history.
On April 12, 2022 we celebrated 70 years of a blissful marriage and still hold hands any time we are close enough.
LIFE ON THE RANCH
Each morning as I stand by the kitchen window he comes over and puts his arms around me and we just stand there and look at the high pasture in the far distance.
The winter wheat is emerald green with a herd of Black Angus cattle grazing in the morning mist. In the silence of early morning it seems as if a hush has fallen on the earth.
Living in the middle of the 120 acres means the only sounds we hear are those of nature — squawking crows, howling coyotes on a cold winter’s night and sometimes a mockingbird singing his songs.
It is then we realize how fortunate we are to live on this beautiful place and we try to be good stewards of God’s world, for we are here for a brief moment in the history of life on earth.
— Submitted by Joyce Duncan Payne with a heart full of love — thanks for coming along.
Posted in Breaking News, News