Students of Honors Northeast took yet another festive day trip  to the Dallas metro last Friday, 28 January.  With the help of donors to Honors Northeast, especially Drs. Jim and Paula Archer, the group enjoyed many special experiences.

The group rendezvoused first at the Greenville Starbucks for breakfast.  Next, the group had an encounter with the organist of Southern Methodist University, Benjamin Kolodziej, at his home church at St. John’s Episcopal in the White Rock section of Dallas.  Before the telephone exchange of the early 1900s, the pipe organ was the most complex invention known to mankind. Kolodziej pressed the students to deduce various musical and scientific principles at work in the organ, and played several concert pieces, demonstrating the colors and rhythmic power of the instrument.

The group then headed to North Park Center to shop and to have lunch.   At 2PM, it was a short ride to the Arts District, and particularly, the Dallas Museum of Art.   Its fourth-floor rendition of giant icebergs by Frederic Church is always a favorite.  Finally the group proceeded north to Allen to experience a hockey game with the Allen Americans.  There were many in-between-the-action episodes of entertainment during the game, including the dancing Ice Angels, a chuck-the-puck contest, and interesting light shows that employed phone apps.  The Allen Americans defeated the Newfoundland Growlers 3-2, coming behind from a 2-0 deficit.  As a special feature the NTCC group, not only sat at center ice, and received a special mention during the game, but were able to take a final group picture by the ice (above). 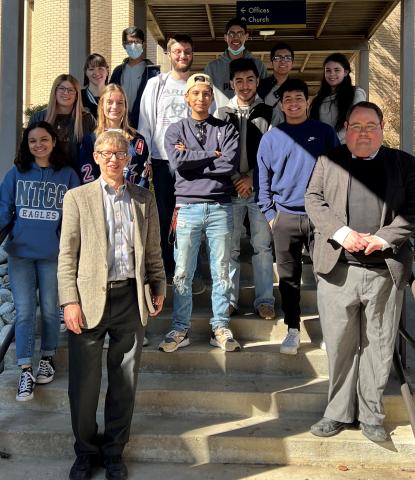 Honors Northeast is now accepting applications for the 2022-23 school year. 1 March is the deadline for obtaining an optimal scholarship The program confers institutional and private scholarships, as well as many other amenities. Talented public high school students, high school seniors, homeschoolers in transition, and parents are welcome to contact Dr. Andrew P. Yox, Honors Director, at ayox@ntcc.edu, and/or apply through the honors website: <www.ntcc.edu/honors>.

ETCOG Requests Nominations from the Public for Regional Service Awards