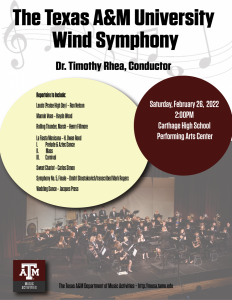 The Texas A&M University Wind Symphony, under the direction of DeKalb, TX native Dr. Timothy Rhea, will perform a free concert in Carthage High School’s new 2,100 seat Performing Arts Center on Sunday, February 26 at 2:00 p.m. The repertoire is an exciting mix of new and old compositions and will be a user-friendly concert for the average concert-goer. A reception after the concert will provide everyone the opportunity to mingle with the performers. We invite everyone to Carthage to enjoy this unique opportunity to experience a live concert of a world-class musical ensemble.
The Wind Symphony has performed at the Texas Music Educators Association, the Western International Band Clinic in Seattle, the American Bandmasters Association, the College Band Directors National Association Convention, and the Midwest Clinic in Chicago. In 2008, the wind symphony performed in New York City’s Carnegie Hall. Since 1999, four European concert tours with the wind symphony have resulted in performances in Italy, Germany, Ireland, Austria, The Czech Republic, and England. The band records regularly each academic year and its series of compact discs recordings are with Mark Recordings of New York. Dr. Timothy Rhea, Director of Bands, has served as conductor of the wind symphony since 1995.
Posted in News