Shaun Davis, of San Benito, demonstrated an entrepreneurial spirit of establishing his own business in his early 20s.

He graduated from Texas State Technical College’s Harlingen campus in May 2001 with a certificate of completion in Computerized Bookkeeping. 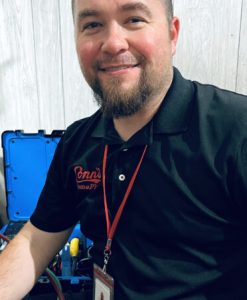 “I was excellent at handling money,” he said. “I sold auto parts for vehicles and motorcycles as a side job. However, the economy was not at its best in 2008. I had to seek other ventures to earn an income.”

Davis later served as a plumber at Valley Baptist Hospital in Harlingen. On several occasions he was referred to air conditioning duties based on his expertise as a mechanic.

Then the pandemic became an issue.

Consequently he chose to broaden his knowledge in air conditioning at TSTC’s Harlingen campus. He graduated from TSTC with a certificate of completion in HVAC Technology in August 2021.

Davis is currently an appliance technician with Conn’s HomePlus.

“This job is never boring, and I enjoy that,” he said. “The job duties are different every day. I meet many individuals, and it is never repetitive.”

“I use a scanner on refrigerators and freezers to determine if low refrigerant is detected,” he said. “It could have a locked compressor fault. If it does, I proceed to remove the back panel and use a multimeter to analyze the compressor pongs. I review the ohm and the ground readings. If this turns out to be bad, I have to recover the refrigerant, pull it out and reinstall a new compressor. Then I pull the vacuum. I apply a pressure test, and the final step is to refill it with refrigerant.”

Davis was informed that a technician at his place of employment normally meets company goals around the first year. After completing the first month of training, he has exceeded company goals for three straight months. His secret, he said, is being polite to customers.

Luis Villarreal, service manager for the Rio Grande Valley for Conn’s HomePlus, said he is impressed with how well Davis has done.

“His customer satisfaction rates are more than 98%,” he said. “He has been employed with the company for only four months. We are very pleased with his performance.”

Davis remarked that what he enjoys is helping customers.

“Every client’s home environment is different,” he said. “I enjoy helping to alleviate their stress by offering these services that not everyone can do.”

On its Harlingen campus, TSTC offers an Associate of Applied Science degree in HVAC Technology and an HVAC Technician certificate of completion.

HVAC Technology is one of TSTC’s Performance-Based Education programs. PBE programs allow students to study both online and in person, at a flexible pace, and with a class schedule that can accommodate their lives outside of TSTC.

HVAC mechanics and installers can earn an average of $48,030 per year in Texas, according to the U.S. Bureau of Labor Statistics. These types of positions are expected to grow by 16% in the state through 2028, according to onetonline.org.

Registration for the spring semester is underway. For more information, visit tstc.edu.