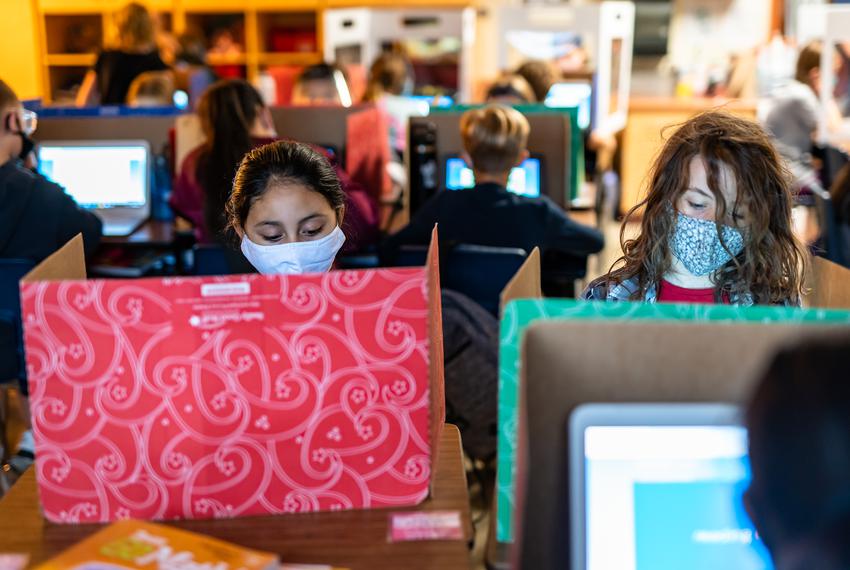 Fifth graders at Jacob’s Well Elementary School in Wimberley during a reading exercise. Some students participated in the exercise at home. Sept. 4, 2020. Credit: Jordan Vonderhaar for The Texas Tribune

By Brian Lopez, The Texas Tribune

“Texas’ ban on mask mandates in public schools back in place after federal appeals court ruling” was first published by The Texas Tribune, a nonprofit, nonpartisan media organization that informs Texans — and engages with them — about public policy, politics, government and statewide issues.

The 5th U.S. Circuit Court of Appeals restored the governor’s executive order on Nov. 24 after Attorney General Ken Paxton appealed an earlier decision by a federal district in Austin that allowed schools to enact mask mandates to combat the spread of the coronavirus.

The case was originally filed in August by the advocacy group Disability Rights Texas, which argued that the governor’s order and the Texas Education Agency’s enforcement of the ban put disabled children at risk and denied them access to public education.

The order from the three-judge panel stated that there had been “no concrete, or actual or imminent, injury as a result of the enforcement” of Abbott’s executive order.

“The district court’s analysis rests on the faulty premise that the only accommodation available to plaintiffs is their schools’ ability to impose mask mandates,” the panel’s decision stated.

The order is another chapter of the monthslong legal dispute between parents, a disability rights organization and Texas officials over whether the state was violating the 1990 Americans with Disabilities Act, also known as the ADA.

Disability Rights Texas accused the state of violating the ADA and the Rehabilitation Act, which forbids organizations and employers from excluding or denying individuals with disabilities an equal opportunity to receive program benefits and services.

“The spread of COVID-19 poses an even greater risk for children with special health needs,” U.S. District Judge Lee Yeakel said on Nov. 10. “Children with certain underlying conditions who contract COVID-19 are more likely to experience severe acute biological effects and to require admission to a hospital and the hospital’s intensive-care unit.”

Dustin Rynders, supervising attorney with Disability Rights Texas, said he is disappointed with the court’s order but looks forward to making their case once again.

“Our suit has always been about allowing students with disabilities at high risk of COVID to attend schools in person as safely as possible,” he said. “As new COVID variants threaten to make an improving situation worse again, it is imperative schools have the option of requiring masks in the class, campus or district as needed to protect vulnerable students.”

This article originally appeared in The Texas Tribune at https://www.texastribune.org/2021/12/01/texas-mask-mandate-ban-public-schools/.

Kilgore ArtWalk coming up on Feb. 12